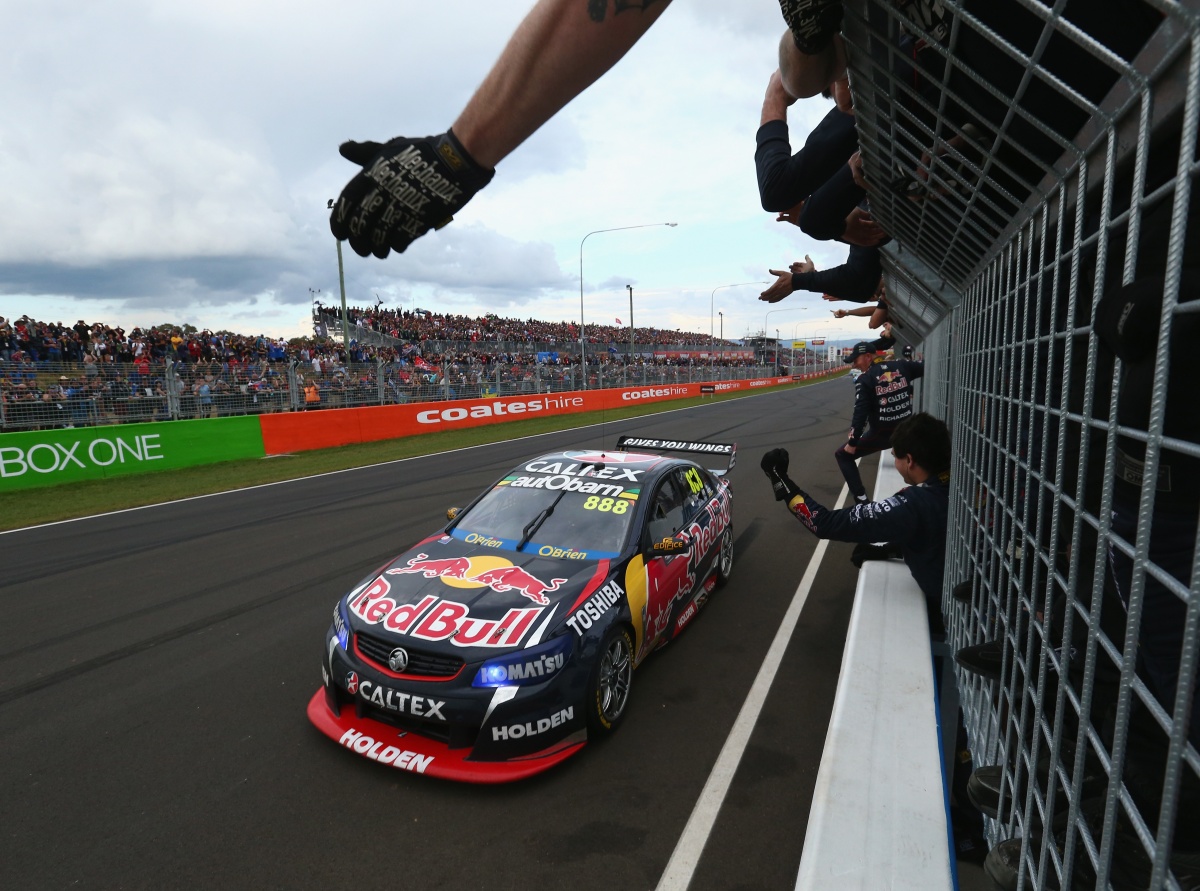 Craig Lowndes has won a sixth Bathurst 1000 title, holding off a frantic chasing pack in a dramatic race at Mount Panorama.

Following up from his 1996, 2006, 2007, 2008 and 2010 triumphs, Holden’s Lowndes maintained a three-second lead after the safety car was called away with 19 laps to go, as he and team-mate Steven Richards finished ahead of second-placed Mark Winterbottom (Ford) and Garth Tander (Holden) in third on Sunday.

“It’s quite amazing. I think as the day went on, the car got better, and Richo did a fantastic job,” Lowndes said.

“I had to make amends for last year. I’ve got to thank the boys. All the guys at Red Bull racing. They’ve given us a car and this man here [Richards] has been sensational, it’s been a wonderful year.”

Between the two of them, Lowndes and Richards now have 10 Bathurst titles.

“That’s not bad, is it? Not bad for an old guy,” Richards said alongside Lowndes.

“Fantastic. This is an incredible effort by the whole team. We were keeping our head down all weekend.

“We knew we had a great car, and these boys pulled off an incredible strategy and it worked spot on.”

There was more agony for Jamie Whincup at the Great Race as he overtook the safety car with 20 laps to go, prompting a drive-through penalty that cost him a potential victory for the second year running.

Whincup and Holden team-mate Paul Dumbrell had led for the majority of the race until first David Reynolds, then Lowndes overtook, before Lowndes took the outright lead in a superb duel with Reynolds with 40 laps to go.

But the leading four drivers began to bunch up, until DJR Team Penske’s Scott Pye rammed into a barrier after over-sprinting a corner, cueing the safety car as Reynolds, Winterbottom and Lowndes pitted, with Whincup staying out.

Following Pye’s crash, Lowndes took control of the race, building a sufficient gap each lap while a mad scramble for the podium places ensued behind him.

Kiwi driver Fabian Coulthard made an attempt for the top three placings, but took his car too wide on a corner as the likes of Garth Tander and Shane van Gisbergen also made forays forward.

Ultimately, championship leader Winterbottom had enough in the tank to claim second place, less than two seconds behind Lowndes, ahead of third-placed Tander.

Winterbottom shows guts to fight back

Winterbottom’s second-place finish was the result of a tremendous fight back, having copped two black flag penalties in the race.

ProDrive Racing Australia – winner of the last two Bathurst 1000 races – had already lost defending champion Mostert to a broken leg and wrist in a crash during qualifying, only to see Winterbottom suffer electrical problems that affected his brake lights on race day.

But Winterbottom hung on to fight it out in the final stages, finishing second to keep his team’s momentum rolling heading in to the next round of racing at the Gold Coast 600 enduro on October 23.

A crash in the barrier on the 16th lap saw Renee Gracie – part of the all-female Prodrive Racing team alongside Simona de Silvestro – plough into the barrier after skidding on oil, leaving her team in the pits for 53 minutes.

“There was bloody fluid on the road and I’m in the wall. I’m so sorry,” Gracie told race engineer Paul Ceprnich on the team radio.

“I’m coming back to the pits now. The steering’s stuffed.”

But to raucous cheers, De Silvestro got the car back out on the track, 37 laps in arrears.

In a marathon effort, De Silvestro hauled Prodrive Racing to a classified finish after managing to complete 121 laps.

The wind began to pick up on the 88th lap, bringing with it a downpour of rain, with the track declared wet on the 91st lap.

With the pack jostling for pit priority, Jonothan Webb skidded off the slick track during a risky tussle with Nissan’s Todd Kelly, but the Tekno driver recovered as the chasing pack pitted en masse.

But Whincup stayed out on the track in a gamble to gain some distance on the pursuing teams, pitting a lap later to change to wet tyres.

A safety car was ordered on the 80th lap when Lucas Dumbrell Motorsport’s Tim Blanchard clipped the wall before careening into another barrier further along. Blanchard emerged from the car unscathed.

A safety car had earlier been called on the 36th lap when Super Black Racing’s Ant Pedersen was tagged by Macauley Jones (Britek), bundling Pedersen into the wall. That crash saw Pedersen and Andre Heimgartner ruled out of the race.

That incident followed a scare for Jack Perkins as he tried to enter the pits, only to skid back out onto the racing track, before regaining control to complete the lap and pit under the safety car.