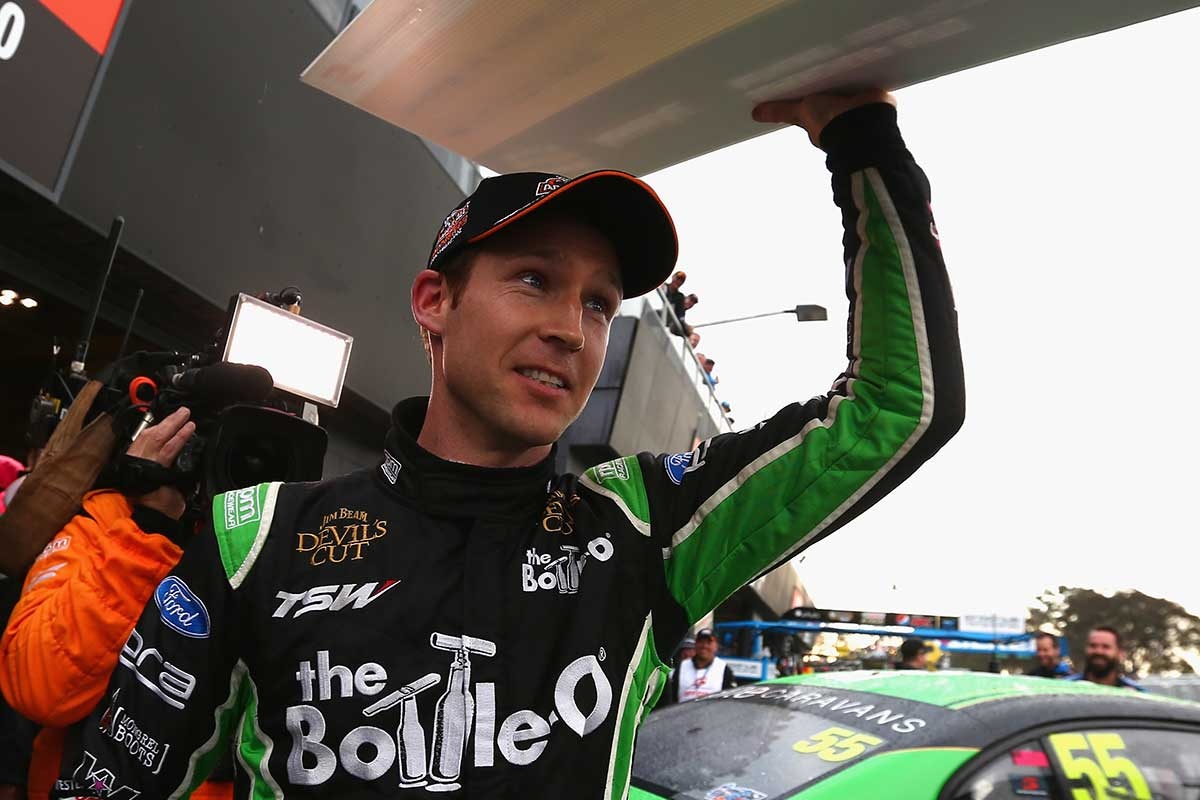 Suddenly controversial Ford driver David Reynolds has a new line to be remembered by after claiming pole position for Sunday’s Bathurst 1000 at Mount Panorama.

Reynolds emerged from atrocious qualifying conditions on Saturday to dedicate his maiden pole on the mountain to injured teammate Chaz Mostert.

• Motorsport rocked by sexist comments
• Like a (grid) girl: F1 needs to man up
• Bathurst driver fined for ‘disgraceful’ comments

Reynolds appeared doomed to be remembered this week solely for an offensive remark directed at an all-female team at Bathurst, earning him a $25,000 fine from V8 Supercars.

But Reynolds conjured a much more-positive catch phrase after clocking two minutes, 27.82 seconds to emerge fastest in Saturday’s top 10 shootout.

Mostert had a rod inserted into his broken leg in Orange Base Hospital on Saturday after his horror qualifying crash 24 hours earlier that also injured three trackside officials.

A picture of Mostert giving a thumbs-up from his hospital bed appeared on Reynolds’ iPad as he high-fived in their team garage once pole position was confirmed.

“Yesterday was bad for our team. We have got a driver in the hospital and quite hurt,” Reynolds said.

“We are all thinking about him at the minute.”

Reynolds said his thoughts were on Mostert and not silencing his critics as he negotiated his way around the first wet shootout at Bathurst since 2000.

“I can put that stuff behind me,” he said of the whopping fine.

“But I was going to do that anyway and concentrate on the race – it’s the biggest day of the year for us.”

He can at least pay some of his fine off – Reynolds won $5000 for his pole triumph.

Reynolds’ Prodrive Racing teammate, V8 series leader Mark Winterbottom, had made no secret of the fact he wanted to claim pole for Mostert.

But he was left kicking cans after rain sabotaged Saturday’s opening qualifying session, ensuring he failed to make the shootout which determined the top-10 grid spots.

“He (Mostert) will be angry with us now because we didn’t do what we said we would do and get pole,” Edwards said earlier on Saturday.

But Reynolds ensured smiles returned in the Ford team’s garage.

Reynolds’ shootout time proved untouchable after negotiating his way around the mountain in the better of the dreadful conditions.

“When the rain started coming down, I knew it would be a struggle for the last couple of contenders – I kind of knew in my heart I had it (pole),” Reynolds said.

The all-female team at the end of Reynolds’ ill-advised comment – Renee Gracie and Simona de Silvestro – will start second last on the grid in Sunday’s Great Race.