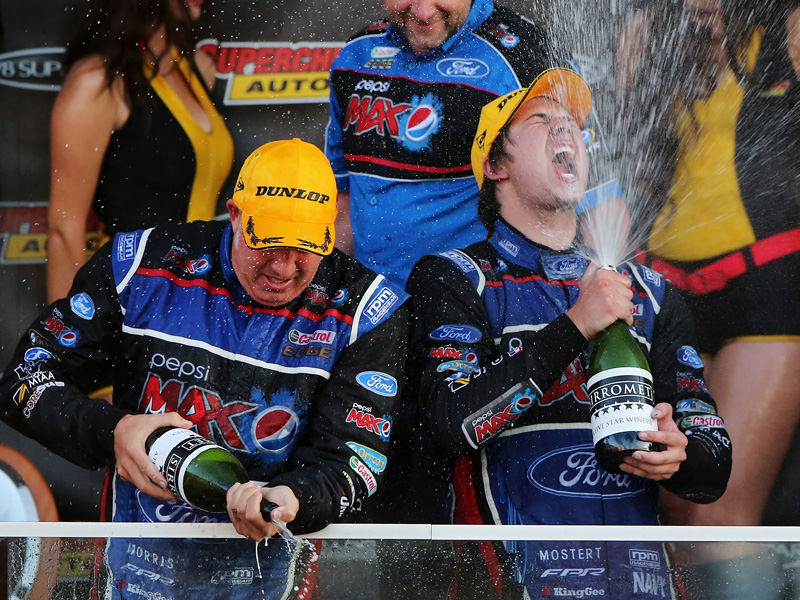 More than 30 V8 Supercar drivers will brave the slopes of Mount Panorama on Sunday as Australia’s most famous motor race – the Bathurst 1000 – takes over the famous mountain.

Among the favourites is four-time winner Jamie Whincup (car no.1).

While Whincup’s form hasn’t been his usual dominating best this season, his teammate Paul Dumbrell might help bring him up to speed.

• Bathurst driver fined for ‘disgraceful’ comments
• The major flaw that is leaving the A-League exposed
• If you thought the footy was over, think again

He and Dumbrell snared pole position for the Sandown 500 before a bad fuel strategy play and a punctured tyre halted their bid to win the opening endurance race of the season.

Dumbrell is one of the quickest and most reliable co-drivers in the field.

Whincup had earlier this week hosed down talk that lap records would be under threat at Bathurst this year despite the introduction of a new gearing set-up.

Teams have removed a “rev-limiter” which had stopped acceleration and restricted top speeds to 297kph.

It sparked speculation that drivers would crack the 300kph barrier for the first time down the legendary Conrod Straight.

Champion Chaz Mostert, 23, surprised absolutely everyone to win the Bathurst 1000 in 2014.

He won the race from the back of the grid – the lowest ever starter to take home the event.

But he won’t be on the starting grid this weekend, after fracturing a leg and a wrist in a horror crash in qualifying on Friday.

There will be stiff competition from a couple of the race’s veteran pairings looking to add to their Bathurst wins.

The pair won the Sandown 500 earlier this year.

Winterbottom arrived at the mountain leading the series with 2215 points – almost 200 ahead of Ford teammate and Bathurst defending champion Mostert.

“If I crash trying I could be 100 points off the lead – if someone else does then they are wiped out,” Winterbottom told AAP.

“People think I am under pressure but it is a good thing.

“I won’t do anything stupid, but that’s what you have to do to win it anyway.”

Prodrive Racing Australia’s Falcons and Winterbotton have been the quickest cars all year.

Although Craig Lowndes (five wins) and Steven Richards (three wins) might have something to say about that.

The multiple Bathurst winning veterans (41 and 43-years-of-age respectively) head to Mount Panorama after a Sandown 500 they will be desperate to forget.

Craig Lowndes’ (car no.888) championship title challenge for 2015 appears to have come to an end.

But there is no reason he cannot wrangle his Red Bull Commodore into shape for another Bathurst win.

Steven Richards is a steady and reliable co-driver with a proven record at the mountain.

If it doesn’t go to a favourite, the winning car might come from these names.

After a stint racing Nascar over in America, Marcus Ambrose (car no.17) comes back to the mountain.

His vaunted return to V8 Supercars has not gone to plan.

But the Tasmanian is back racing in time for another crack at Bathurst.

For a driver with such a storied history, Ambrose is desperate to add Bathurst success to his CV in his Ford Falcon.

A 12th-placed finish at Sandown was solid but Ambrose will be better for the time behind the wheel and, after a rough start, DJR Team Penske’s results are improving.

They are a possible dark horse.

Not to be counted out either is three-time winner Garth Tander (car no.2) who is racing with Warren Luff in a Holden Commodore, and veteran one-time winner Russell Ingall (car no.22), 51, with Jack Perkins, also in a Commodore.

Simona De Silvestro and Renee Gracie (car no.200) are the first female combination to compete at Bathurst since 1998.

The female pair were already motivated to silence critics at Mount Panorama after V8 great Dick Johnson claimed they were “a million to one” and had no chance of finishing their first Bathurst 1000.

However comments by Ford driver David Reynold’s might give them more impetus in their Ford Falcon.

De Silvestro and Gracie took two seconds off their best time to finish second last in a 26-strong field in the final practice session on Thursday.

The female team showed they would not take any lip when they fired back at Johnson on Wednesday.

De Silvestro – one of only three women to notch an IndyCar podium – said before practice it would be good to silence the critics.

“Because the attention is on us if we don’t finish it would be a shame,” she said.

Everything you need to know about the Bathurst 1000