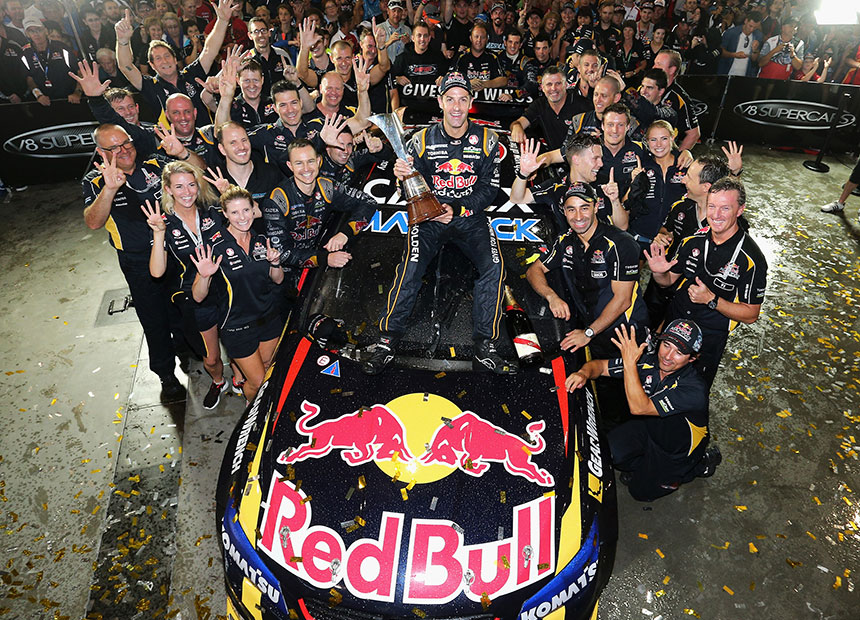 The champagne was still fresh on his face but Jamie Whincup was already feeling paranoid about bettering his own record of six V8 Supercar titles next year.

The Holden superstar on Sunday officially cemented his place as the most successful driver in Australian touring car history when he was crowned 2014 champion.

He started the season-ending Sydney 500 with an unassailable lead, yet still managed to pull two wins from three races in extraordinary circumstances.

The closing 250km feature was abandoned with 29 laps to go after a storm lashed Sydney Olympic Park, turning parts of the street circuit into a wild river.

It was almost a carbon copy of Saturday’s 125km race, which also had to be suspended amid torrential rain.

Shane van Gisbergen was declared the final race winner after taking the lead just before the safety car intervened, securing him the season’s runner-up trophy.

Ford’s Mark Winterbottom, who led the championship for several rounds earlier in the year, ended up third overall after his 19th-placing with veteran Craig Lowndes fourth.

“It was a bit of a weird end to what’s been one of the best V8 Supercar championships of all time,” said Whincup, who finished the race fourth and 586 points in front on the driver’s standings.

“I’m in the position now where I’ve been the last three years, thinking that it’s been a great year but with a little bit of paranoia about how we’re going to back this up.

“How are we going to go one better than what we’ve done this year?

“I know this moment won’t last forever, but I’m in a very critical and amazing part of my life – which could be the best part of my life, I’m not sure.

“But I’ll come out again next year and try to do what I’ve done the last three years and keep backing up and ride this massive roller coaster as long as I can.”

Whincup now stands alone as the winner of most titles in the 54-year history of Australian touring car/V8 Supercars championships.

He also equals Geoghegan’s record for most successive championships with four.

“It’s like your kids – you don’t have any favourites, they’re all good in their own way.

“I don’t have any kids – not that I know of anyway – but that’s probably the best way to sum up these championships.

“Right now, this one feels bigger, better and more important than any other – but that’s just because I’m in the moment.”

Whincup said both he and Red Bull Racing were very good at bottling up their emotions, but was planning to celebrate big with the team and family on Sunday night.

“You bottle all that emotion until moments like these, where you reflect on what the year’s been and certainly all the good things that have happened,” he said.