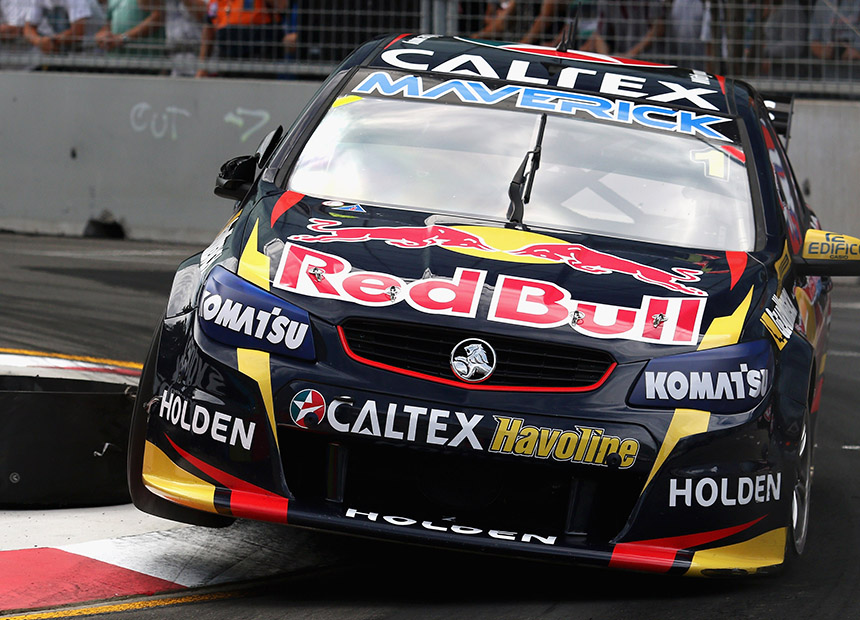 The second race of the V8 Supercars Sydney 500 has been suspended due to severe storms sweeping over Sydney.

Sydney Olympic Park was pelted by heavy rain about 15 laps into the 37-lap race on Saturday, flooding parts of the street circuit.

The race was restarted on lap 20 under the safety car, with driving rain still hitting the circuit.

Champion-elect Jamie Whincup was leading the pack when a safety car was called after David Wall’s Ford slid into a concrete barrier.

All cars have lined up in pit lane, ready for a restart if conditions ease.

Earlier Whincup notched up his 88th V8 Supercars win – and lucky 13th for the year – in the opening race of the Sydney 500.

The Red Bull Racing driver started the first of Saturday’s two 125km races from second on the grid, but got the jump on Erebus Motorsport’s maiden polesitter Will Davison.

Whincup was quick to capitalise on his flawless start, sprinting out to a 2.5sec lead by lap four and looked certain to stay in front for the entire race.

But two safety cars helped push Holden rival Tim Slade to the lead, making for an entertaining battle before he eventually surrendered to Whincup with 10 laps left.

“We want to round the year off as well as we possibly can, so a perfect start with a win in race one,” said Whincup, who will be officially crowned series champion for a record sixth time in seven years on Sunday.

“I had a great battle with Tim … that’s what it’s all about.”

Shane van Gisbergen’s sixth-place has pushed him right into contention for the 2014 runner-up position, after Mark Winterbottom lodged his Ford into a tyre barrier on lap 11 – prompting the first safety car.

He was the last of the non-retirements in 23rd, with a powersteering issue rubbing Davison out early, and Todd Kelly and Scott Pye retiring after a heavy collision.

Ambrose, who has spent the past nine years racing in America’s NASCAR series, crashed in the first qualifying session but made it back in time for the race.

He is steering a wildcard entry for Dick Johnson Racing this weekend ahead of his full-time drive with the yet-to-be-formed DJR Team Penske.

“His aim is to only finish the weekend – and so far so good,” said team owner Dick Johnson.