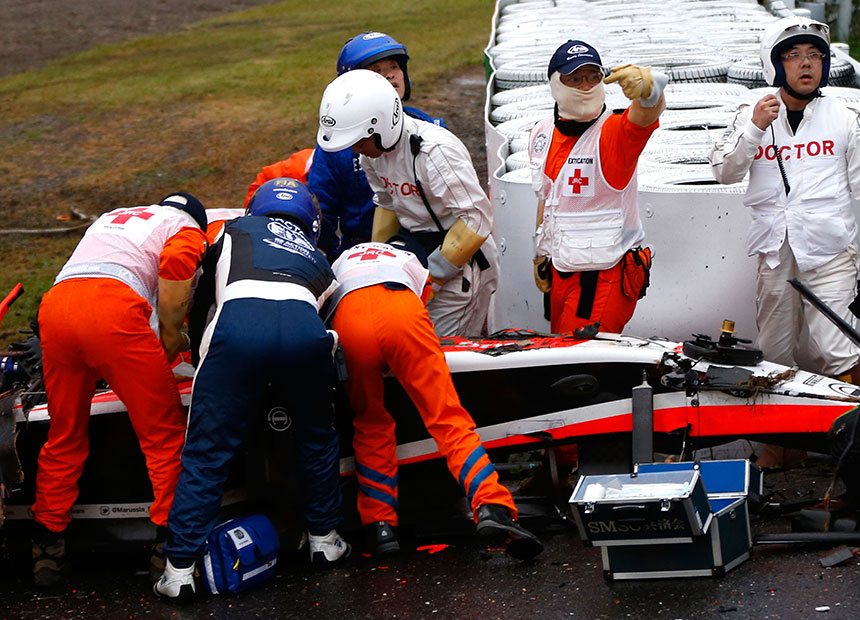 French Formula One driver Jules Bianchi is undergoing surgery in hospital for a “severe head injury” after an incident-packed Japanese Grand Prix.

The Frenchman was unconscious when he was taken to a nearby hospital following a crash during Sunday’s rain-shortened race and was undergoing emergency surgery.

According to FIA officials, the 25-year-old Bianchi will be moved to intensive care where he will be monitored after the surgery.

The race was red-flagged with nine laps to go after Bianchi went off at Turn 7, where Sauber’s Adrian Sutil had crashed earlier.

The Sauber was being recovered by a crane when Bianchi went off.

My thoughts are with our colleague Jules and his family and team-mates, and we are hoping for some positive news. #japaneseGP

No champagne was sprayed on the podium and there were no celebrations.

“I aquaplaned,” Sutil said. “The rain got more and more. One lap later with waved yellow flags, Jules came around and had the same spin there and that was it. It was the same crash but the outcome was different. The car came out to rescue my car and it all happened.”

Williams driver Felipe Massa lashed race control over the incident, claiming the conditions were too dangerous.

“In my opinion they started the race too early because it was not driveable at the beginning and they finished the race too late. I was screaming on the radio five laps before the safety car that there was too much water on the track but they just took a little bit too long. It was dangerous,” he said.

Sunday’s race started at 3pm local time. An approaching typhoon led to suggestions that the race would be pushed up to an earlier start.

At the time of the crash, rain was falling steadily and it was getting dark. Several drivers complained of not being able to see properly.

The first nine laps were run behind a safety car and it started to rain heavily again near the end of the race.

The result completed a hat-trick of victories for Hamilton and extended his championship lead over Rosberg to 10 points with four races remaining.

Germany’s four-time world champion Sebastian Vettel, who announced on Saturday he was leaving Red Bull at the end of the season, finished third, while Australian team-mate Daniel Ricciardo was fourth.

The win was Hamilton’s eighth of the season and first at Suzuka, with his only other win in Japan coming at the Fuji circuit with McLaren in 2007.