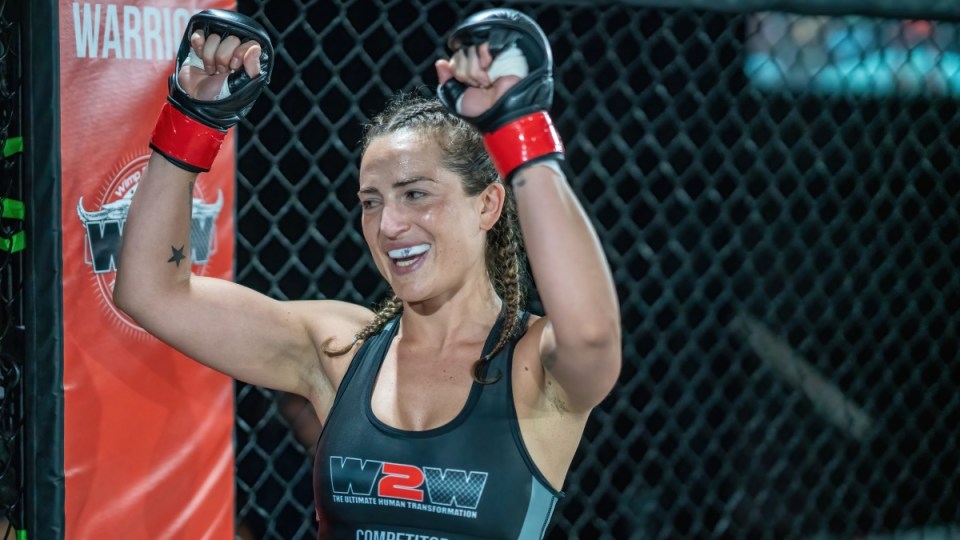 People started asking questions when Tibi Jurecska showed up to work with bruises.

By day, the 37-year-old wore a pencil skirt to a high-rise office. At dawn, she wrapped tape around her wrists and punched other women in cages.

The corporate lawyer had told some of her colleagues she had taken up mixed martial arts, but many pictured her doing something less bloody, like karate.

Tibi picked up the sport in June 2019 after reading a story in Sports Illustrated about UFC star Ronda Rousey.

At first she just wanted to do something that would make her “feel and look tough” like the American fighter. “But it was much more than that in the end,” she said.

For while few sports are as bloody and as brutal as MMA, most of the people involved in it say the violence is just a sideshow. The real battle is invisible – it’s the one happening inside your head.

It’s one of the reasons I have followed the sport for about seven years now. The fights are entertainment enough, especially when you have a basic understanding of the techniques involved. But each fighter also has a story and a reason to fight that adds depth to the spectacle.

Tibi is a case in point.

The Sydney woman suffers from anxiety and often feels nervous before she steps into the boardroom – something she partly puts down to growing up in South Africa.

When she was 12, armed burglars tried to climb the fence surrounding her family’s farm. Little Tibi climbed into a wardrobe to hide.

The experience and others like it left her with “a sense of high alertness” and anxiety that she carried with her into adult life.

Then she learnt to throw a punch.

“You feel like … if you were put in a difficult situation, you might not panic,” she said.

“You might be able to get away at least, because you’re not panicking – and that’s a really great feeling.”

Now when Tibi gets jittery before an important meeting, she draws strength from her training and her two amateur cage fights.

“I was terrified before I got into the cage. I was so scared every morning, but I did it anyway – and I felt a sense of achievement. I felt so proud,” Tibi said.

“And so I remind myself even in moments now – where the fear is still there, the anxiety is there – I use that to sort of go … ‘Look at what you achieved, you were terrified then and you could overcome it then, so there’s no reason why you can’t do that today’.”

Tibi’s fears and anxieties are still there every day. Only now she’s proven to herself that she has the power to overcome them.

Lessons like this are everywhere in mixed martial arts, as I found out from UFC star Conor McGregor’s head coach, John Kavanagh.

Kavanagh is known within the MMA community for espousing the sport’s higher values of self-improvement and learning through failure.

His favourite saying is “you either win or you learn”.

I was certainly in for a schooling when I met the legendary coach at Legacy BJJ Academy in Sydney’s trendy Chippendale.

“Who’s my next victim?” he said with a smile.

I raised a hand before I had too much more time to think.

I had done martial arts before – but never did I think I’d train with someone like Kavanagh.

“Well, for the average person, and I include myself in that, one of the most stressful things we can imagine is a physical confrontation,” Kavanagh said.

“Halfway through they go, ‘I think I can do this’.”

Kavanagh said many first-timers in their 40s and 50s had signed up to a cage fight after 20 weeks of intense training under his Alta program.

Rolling with the punches

Kavanagh sets a trap when we drill a combination.

Traps are a key strategy, he said, because your opponent could hit you from so many different angles that you first want them to think they have the upper hand.

Although MMA has plenty of rules, it is far more free-flowing than other combat sports, like boxing, and there’s more technique involved than the casual observer might suspect.

Grappling, wrestling, kicking and striking with the elbow and knee are perfectly legitimate. If you go to grab someone’s legs without first giving them something to worry about, they will uppercut or knee you in the face.

Our combination went like this: I threw a right hook; Kavanagh raised his fists to protect his face; I grabbed his left leg, stepped back and to the side, putting pressure on his torso with my head so that I could take him to the mat.

He put his legs on my hips to keep me at a distance but I threw his legs to the right, stepped to the left, and threw a right hook from a standing position.

Then I swung my right leg over his stomach and climbed into “mount”.

That’s one of the most dominant positions in MMA, with one fighter sitting atop the other while their legs squeeze their opponent’s torso like a vice. From there, the fighter on top can unleash a flurry of punches while the grounded fighter has the difficult job of evading their attack with nowhere to hide.

It’s known as “ground and pound”, and it’s often the evidence of choice for critics who argue the sport is no better than human cockfighting.

I didn’t stick around to find out what an actual pounding from Kavanagh would feel like.

Even just one training round left me breathless. But, like Tibi, I have been walking taller ever since.

Tibi suffers from anxiety. Stepping into the cage helped her overcome it