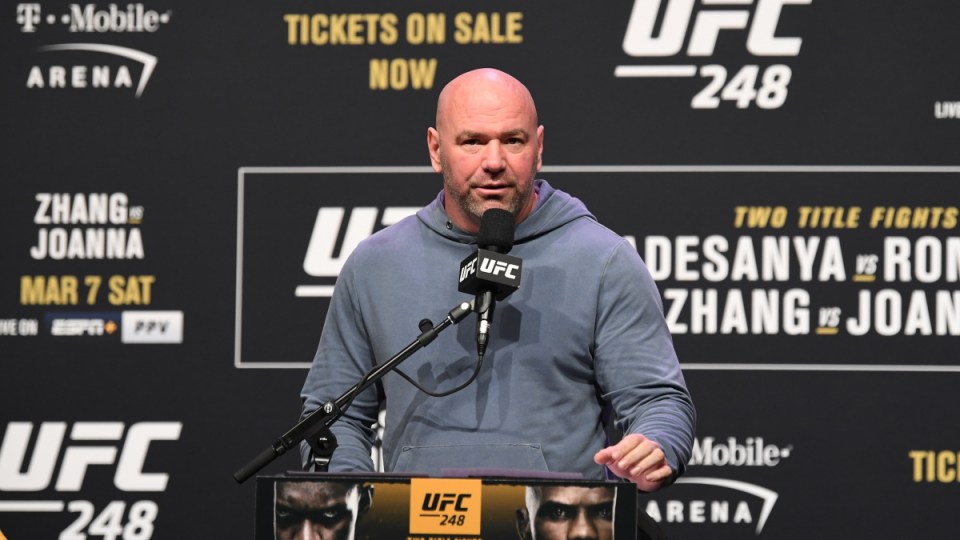 As world sports search for ways to get around the coronavirus pandemic, the UFC is talking up the possibility of forging ahead with UFC 249.

In a move with echoes from Bruce Lee’s 1973 martial arts classic Enter the Dragon, White insists the show must go on.

The UFC boss revealed a fight between lightweight champion Khabib Nurmagomedov and Tony Ferguson had been scrapped, with Nurmagomedov apparently unable to leave Russia amid the pandemic.

American Justin Gaethje is the new man to replace Nurmagomedov at a yet-to-be-determined location.

White is evidently confident of getting the fight up, having already updated his Twitter bio to include details of the bout.

“I’m this close to getting a deal done so this place where this fight is going to be on April 18th, I have locked up for two months. So I’m going to continue to pump fights out,” White told ESPN.

“I’ve also secured an island. I’ve got an island. The infrastructure is being built right now.

“We’re going to do all of our international fights on this island.”

White gave no indication where the island was located.

The fight is signed and is 100% ON LIVE on ESPN somewhere on EARTH!!!! 😃@TonyFergusonXT vs @Justin_Gaethje is LIVE on @espn+ PPV April 18th for the interim lightweight belt! pic.twitter.com/aH44zg5K30

The last UFC event was on March 15 in the Brazilian capital Brasilia.

It became the first event in UFC’s history held behind closed doors after the local governor declared a ban on all large gatherings in response to coronavirus.

Since then, a UFC fight night in London was also cancelled, as were two other cards due to be held at UFC’s headquarters in Las Vegas.

Most US states have restrictions in place that would make it impossible to stage a show, even without an audience.

UFC 249 initially was slated for Brooklyn, but a venue change became necessary several weeks ago.

ESPN, the UFC’s broadcast partner, has said White was attempting to secure an unnamed venue on the west coast for the show.

“I’m terrified and I … love it,” Gaethje tweeted after the announcement of his fight.

Nurmagomedov announced last week that he wasn’t planning to leave his native Dagestan, suggesting Russia’s travel restrictions in response to coronavirus made it impossible.

He later said he would be willing to leave for the fight but couldn’t plan because he didn’t know where or when it would occur.

The island idea is not new, with the NRL admitting it is considering a range of options including moving its entire competition to Tangalooma — on Moreton Island off the Queensland coast — which would allow it to keep the players quarantined.

English football is also looking at proposals to get the EPL season over the line.

Suggestions include squads living together in hotels for the rest of the season, with daily games potentially played at neutral venues across the country.

The AFL has looked at the possibility that teams could be sent to a number of “hubs” in different states in a bid to get the season off the ground.

The idea would involve some teams based in Tasmania and Western Australia, where there are lower COVID-19 infection rates and a possible earlier end to self-isolation and restrictions than elsewhere in Australia.

However AFL Players Association president Patrick Dangerfield has described the idea as “speculative” and said he wasn’t sure how comfortable he was with it.