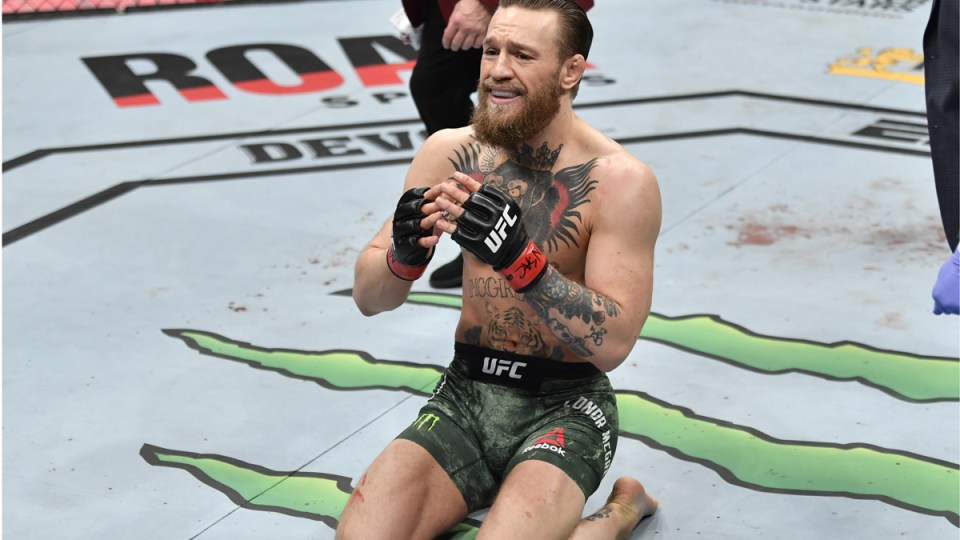 Conor McGregor savours the moment after knocking out Donald Cerrone at the UFC 246 event in Las Vegas on Sunday. Photo: Getty

Conor McGregor stopped Donald Cerrone with a head kick and punches 40 seconds into the first round at UFC 246, announcing his return to mixed martial arts with his first win since 2016.

The Irish former two-division champion returned from a three-year stretch of inactivity and outside-the-cage troubles with a performance that echoed his greatest fights during his unparalleled rise.

McGregor (22-4) floored Cerrone (36-14) only 20 seconds into the bout with a perfectly placed kick, and he mercilessly finished on the ground to the delight of a sellout crowd at T-Mobile Arena in Las Vegas on Sunday.

“It feels very good, I made history here. I set another record: I’m the first fighter in UFC history to secure knockout victories at featherweight, at lightweight and now at welterweight,” McGregor said.

🇮🇪 @TheNotoriousMMA is BACK. #UFC246 pic.twitter.com/df14NZ6zq6

As for who he wants to fight next, McGregor said: “Any one of these little mouthy fools can get it. I like this weight division. I feel really good. It’s good going up and down.

“God willing I came out of here unscathed, I’m in shape. I don’t believe I’m there yet, I’ve still got work to do to get back to where I was.

“I’m going to party tonight and celebrate, spend time with my family and get back in the gym and train.”

McGregor’s hand hadn’t been raised in victory since November 2016, when he stopped lightweight Eddie Alvarez to become the first fighter in UFC history to hold two championship belts simultaneously.

With his fame and fortune multiplying, McGregor fought only his boxing match with Floyd Mayweather in 2017, and he lost a one-sided UFC bout to lightweight champion Khabib Nurmagomedov in late 2018.

After a year of inactivity and trouble outside the cage, McGregor vowed to return to elite form in this bout against a fellow UFC veteran and stoppage specialist.

His dramatic victory over Cerrone indicated he’s on his way.

Cerrone has the most wins in UFC history with 23 victories inside the octagon, a mark that reflects both his durability and commitment to an uncommonly busy schedule.

McGregor won 15 consecutive fights during a five-year run from low-profile shows in Dublin to the world’s biggest MMA events, stopping five straight elite UFC opponents with punches on the way up.