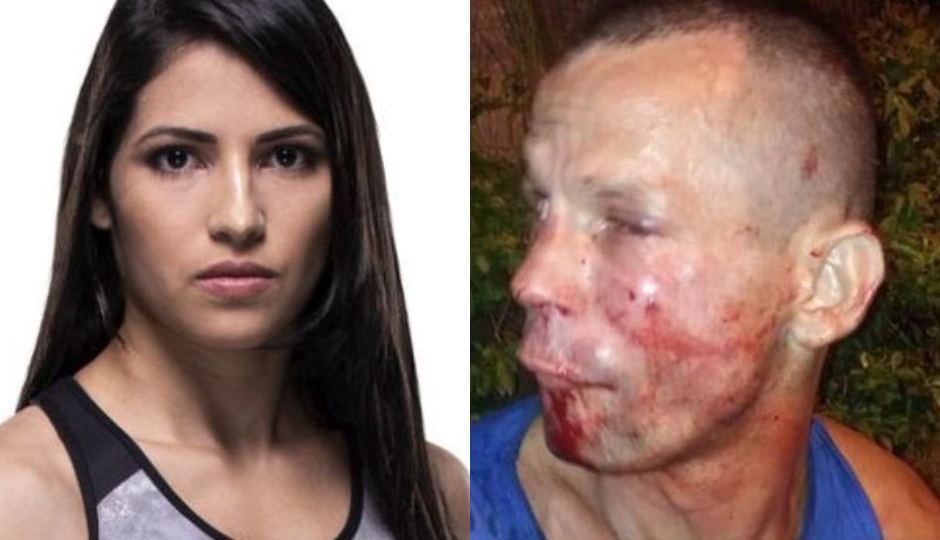 Polyana Viana says she beat up and restrained a would-be mugger who was trying to steal her mobile phone. Photo: UFC/Polyana Viana

A woman standing on her own waiting for an Uber in Rio de Janeiro may have appeared an easy target to a would-be thief.

The only problem for the perpetrator was his target was a strawweight UFC fighter, who turned the tables on the thief with punches, a kick and a “rear-naked choke” before forcing him to sit and wait for the police.

“He asked me the time, I said it, and I saw he wasn’t going to leave. So I already moved to put my cell phone in my waist.

“And then he said, ‘Give me the phone. Don’t try to react, because I’m armed’. Then he put his hand over [a gun], but I realised it was too soft.

“He was really close to me. So I thought, ‘If it’s a gun, he won’t have time to draw it’. So I stood up. I threw two punches and a kick. He fell, then I caught him in a rear-naked choke.
UFC fighter Polyana Viana

“Then I sat him down in the same place we were before and said, ‘Now we’ll wait for the police’.”

With her assailant subdued, Viana found the gun was in fact just a cardboard cut-out of a pistol.

She said she asked passers-by to call the police while she kept the man pinned.

“I was fine because he didn’t even react after. Since he took the punches very quickly, I think he was scared. So he didn’t react anymore,” she said.

Viana said police took the man to a medical facility to treat his wounds and then to the police station, where she filed a report.

UFC president Dana White applauded Viana, tweeting an image of the fighter alongside the mugger.

“On the left is @Polyana_VianaDF, one of our @UFC fighters and on the right is the guy who tried to rob her #badf***ingidea,” White tweeted.

Viana said she simply went home and made dinner after leaving the police station, adding her hands hurt a little the day after, but it was nothing serious.