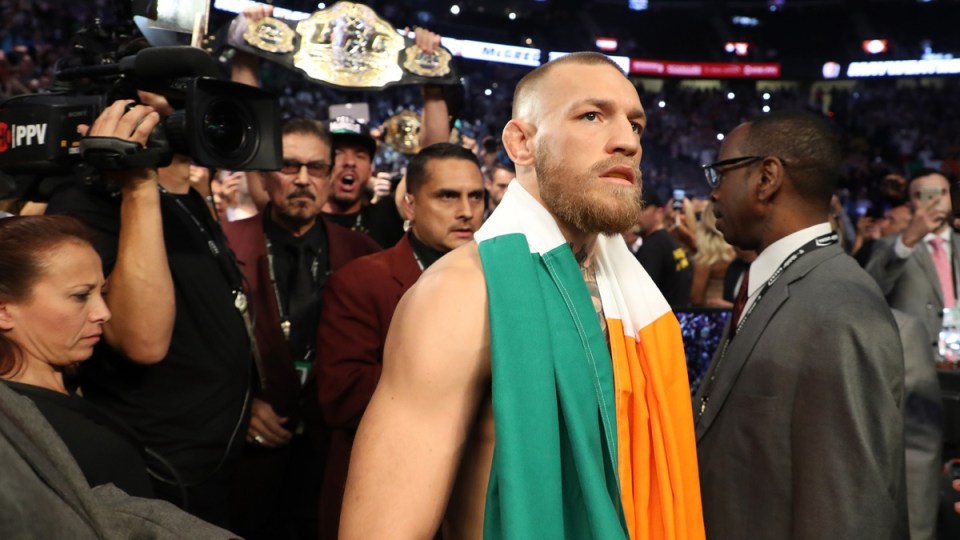 The Irish fighter is reportedly worth more than $US100 million. Photo: Getty

Irish fighter Conor McGregor’s life is at risk after an alleged altercation with mobsters, a leading crime journalist has claimed.

Speculation surrounding McGregor has been rife after he was reportedly involved in a Dublin pub fight that saw him throw punches at men with links to an infamous drug cartel.

UFC boss Dana White – the man responsible for helping make McGregor a global superstar – acknowledged on Wednesday that the reports “can’t be a good thing for Conor”.

And Irish crime journalist Paul Williams went a step further on a radio program, claiming that the 29-year-old McGregor, known as ‘The Notorious’, was in a “very dangerous place”.

“I have to say about this … and I’m wearing my old, veteran crime reporter hat,” Williams told Newstalk Breakfast radio in Ireland.

“Conor McGregor is in a very dangerous place at the moment.

“He has come into conflict through probably no fault of his own, with a group of very, very dangerous people who are tied up with the Kinihans [the cartel].

“These people do not care who Conor McGregor is, what he stands for, how powerful he is, they will drag him down into the cesspit.”

Williams went as far as to say that say that McGregor could, in the next 48 hours, be informed by police officers that his life is on the line.

“This is a huge story and imagine what it would do to our reputation if this national sporting icon is attacked by a bunch of gangsters,” he said.

“I think it’s an extraordinary state of affairs.”

White, at a UFC media lunch, said he wasn’t so sure the claims of the fight were true but did say that the company McGregor keeps may not help him.

“Because if it was true, it would be big. Conor can walk down the street and it’s big news now. If this were true, I just have to believe it would be off-the-charts crazy.

“Can’t be a good thing for Conor. But I’m sure it can be worked out, too.”

White added: “He [McGregor] is a young, rich kid who is a god in Ireland. That’s not the healthiest environment either. It’s all part of it.

“Conor has got a lot [of cling-ons], too. When he travels, he’s got friggin’ people for days with him.

“When you make that kind of money, you’re that famous and you’re a professional athlete, you’re gonna have an overload of cling-ons.”

White is hopeful that McGregor returns to the UFC octagon, but is not so sure he will, given the immense sum of money he made in his boxing fight against Floyd Mayweather Jr earlier this year.