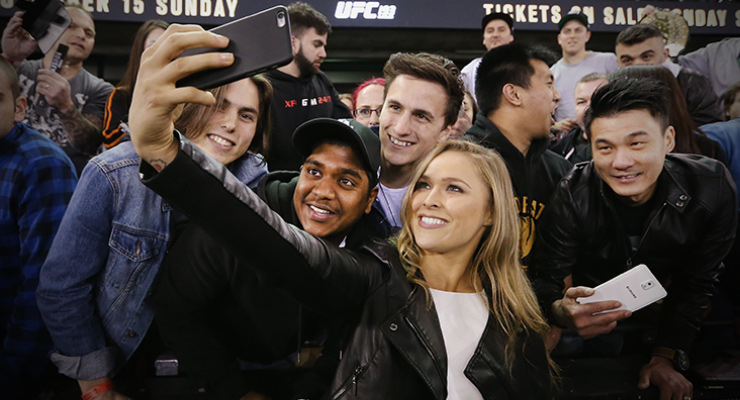 What times these are.

The most devastating fighter on the planet is a woman.

She competes in a sport that’s reviled by many and yet it’s helped turn her into one of the most bankable athletes alive.

And she’s helped the MMA slam another nail into boxing’s coffin.

If you don’t know the name Ronda Rousey yet, you’re about to.

None of her opponents have gone the distance, and the electricity as she walks to the Octagon recalls the heyday of Mike Tyson.

At 28, she is a genuine crossover star.

Professional boxing only ever flirted with female fighters, never giving them the attention they deserved.

Christy Martin, the Coal Miner’s Daughter, could be seen opening Don King cards for years, her bloody nose spray-painting the canvas ahead of Tyson and Julio Cesar Chavez.

Then Lucia Rijker came on the scene – a Dutch woman of devastating power.

But boxing, as it so often does, shot itself in the foot by never giving her the fights and exposure she deserved.

Laila Ali, the daughter of The Greatest, tried to cash in on her name, as did Joe Frazier’s daughter, Jackie Frazier-Lyde.

The pair fought in the first pay-per-view boxing event to be headlined by women in 2001.

UFC chief Dana White – who had been opposed to female fighters previously – knew he was on to a good thing with Rousey, and had her fight with Liz Carmouche in February 2013 headline the bill at UFC 157.

When Rousey knocked out Beth Correia in August this year, the show topped 900,000 pay per view buys.

Her fight against Holly Holm in Melbourne on Sunday afternoon could break the one million mark.

She’s appeared in big-budget Hollywood franchises like The Expendables and Entourage, was the first woman to appear on the cover of Australian Men’s Fitness magazine, and was named in Fortune’s ’40 under 40′ list of the most influential young people in business.

She was the only athlete to appear on the list – alongside entertainers like John Oliver, Taylor Swift and Jessica Alba.

Looks have something to do with it – the mole under Rousey’s left eye is in its own way as arresting as the one on Cindy Crawford’s lip – a ‘beauty spot’ for Gen Y, who like their women beautiful but capable of inflicting grievous bodily harm.

“There’s never been a bigger star than Ronda Rousey,” White said in September.

“She’s got books and she’s got all these movies coming out and she continues to get bigger and bigger.”

The Rousey stage show rolls through Melbourne on Sunday afternoon, when she fights Holm at UFC 193.

There are forecasts that 70,000 people could be at Etihad Stadium, which would make it the best-attended UFC card ever.

Whatever your take is on UFC, there are some things they are absolutely doing right.

Ronda Rousey is one of them. We should pay attention.