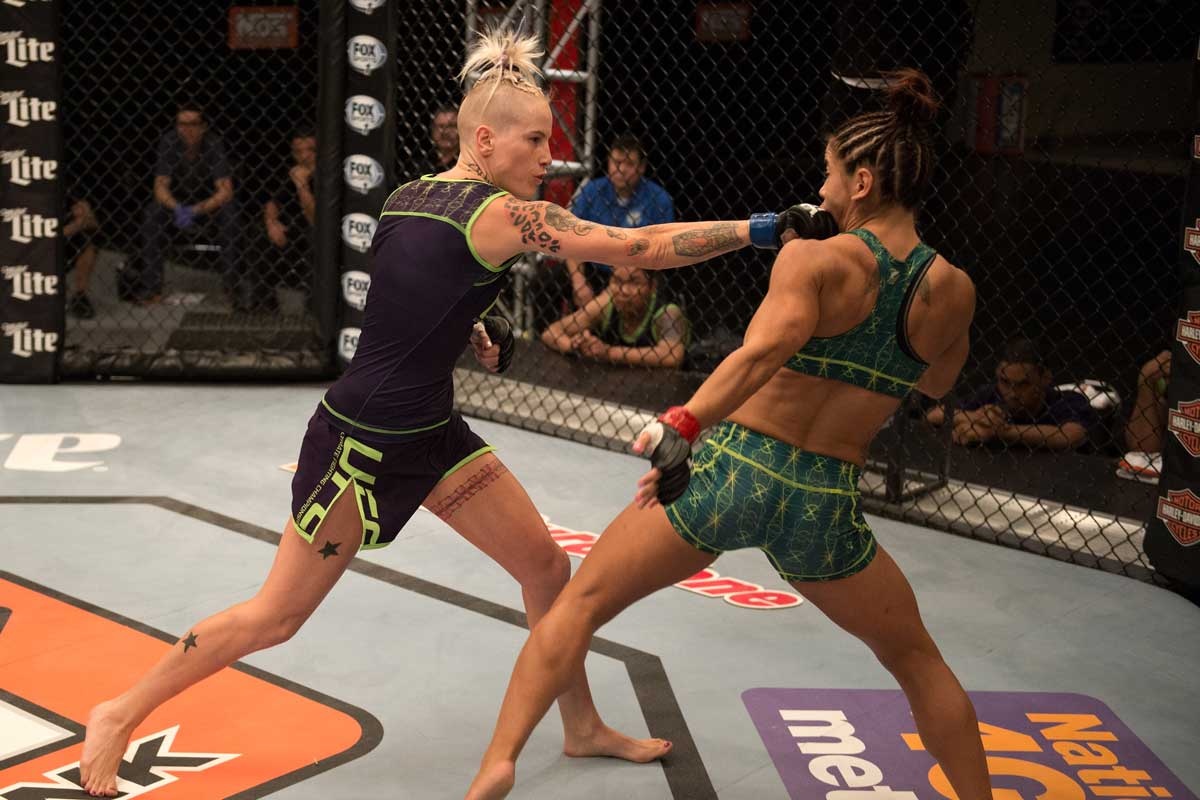 There’s a revolution going on in women’s mixed martial arts and two Australian fighters are in the thick of it.

Alex “Astro-Girl” Chambers and Bec “Rowdy” Rawlings are poised to become the first Australian women to compete in the Ultimate Fighting Championship.

They debut next month in the new and highly competitive strawweight (48-52kg) division.

• Beauty, danger, power: how I fell for cage fighting
• Angela Pippos on sport, art and Jesus the goalie

Not everyone though will be joining in the celebration.

This is a sport with a lingering image problem. To many it’s just brutal, bloody and barbaric – and certainly no place for a woman.

Tell that to the fighter who has a double degree in science and mechatronics engineering with a major in astrophysics.

“Anyone who truly understands MMA and the huge range of skills required to step into the Octagon as a professional fighter would appreciate it for the professional level sport it has become,” Chambers told The New Daily.

When it comes to defending their sport both women are just as formidable outside the cage.

“I find it offensive that people judge the sport and its athletes before educating themselves about the sport first”, said Rawlings, who went to one class and was hooked.

“MMA is not barbaric – sure it’s brutal and raw and may not be everyone’s cup of tea, but it’s a highly skilled sport that takes a full time commitment to compete at the top level.

“MMA is made up of a range of martial arts that have been around for centuries as well as many Olympic sports such as wrestling, judo, tae kwon do and boxing. If MMA is barbaric, then the same has to be said for all the other sports.”

Mixed martial arts isn’t technically banned in Victoria and Western Australia but must be performed in a boxing ring, not a cage.

Labor in Victoria plans to lift the ban on cage fighting if it wins the November 29 election.

Premier Denis Napthine won’t budge. He remains opposed to legalising the controversial sport, because “there is already too much violence in our society”.

There is serious money to be made in staging UFC events in Australia. The three host cities to date – Sydney, Gold Coast and Brisbane – have cumulatively grossed more than $10 million at the gate with millions more in economic impact.

But that’s not what motivates Chambers and Rawlings. They say a lifting of the ban would be a victory for common sense because the Octagon (cage) is designed for MMA. It prevents the athletes from falling out, particularly when a fight goes to the ground, and also protects the officials.

I’ve seen lives change in gyms. Like any martial art, our sport is all about honour, respect, self-discipline.

“It would mean a step away from ignorance, and put Victoria back in current time, and away from the early 1900’s. The cage is not about barbarism, but rather about safety for the athletes,” Chambers said.

“The perception of the public regarding MMA fights in a cage is the problem, a lack of understanding about the sport of MMA is the problem.”

One of the most outspoken critics in Victoria is Police Chief Commissioner Ken Lay. His argument is the sport glamourises extreme violence and any lifting of the ban could undo all the good work that’s been done in the community to prevent it.

“To suggest that MMA encourages more violence in the community is absurd,” Rawlings said.

“In fact, it’s the solution to a lot of problems. I’ve seen lives change in gyms. Like any martial art, our sport is all about honour, respect, self-discipline. People need to educate themselves on the sport before they make comments like that.

Both fighters embrace their status as role models and want to encourage more women to train in MMA. They say its empowering and important women know how to defend themselves.

Fighters are a different breed to you and I – can you imagine walking into a pulsating arena and stepping into an eight-sided cage to fight someone?

It’s takes a particular kind of person to do this for a living – to fight professionally.

And professional they are – seeing them train, their intensity, the sheer weight of hours and discipline – I can understand their frustrations with the way their sport is perceived.

I myself qualify for the strawweight class – but would I step into the Octagon? I have thought long and hard about this – and yes I would.

Wearing a suit of armour.

UFC and the women who love it