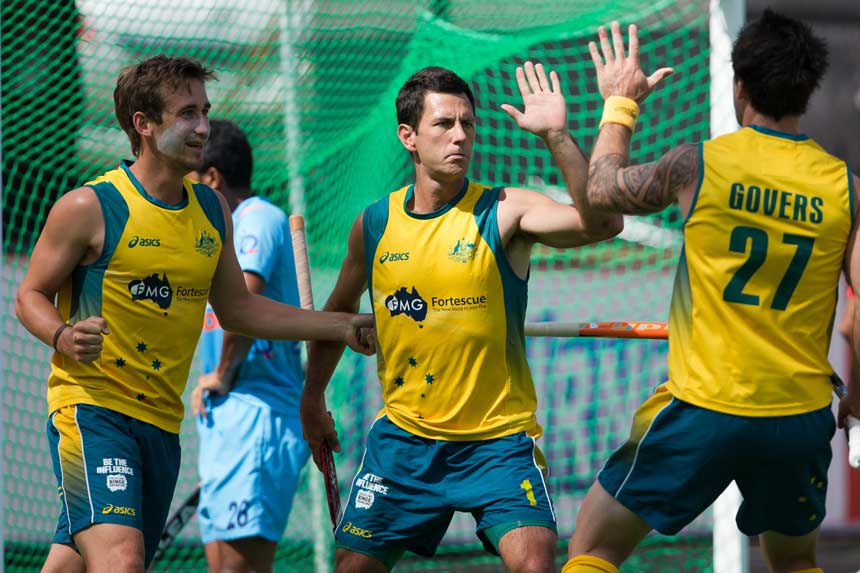 You’ve been saying it for years haven’t you? That by summer you’ll be in the gym, burning off the back fat and getting yourself into some decent shape for the upcoming club hockey season.

But you haven’t. Again. And you’ll be carrying some extra girth onto the pitch this season. We are not ones to judge. In fact, we have great news. You can still be the best player in your team this year without the muscles and carrying those niggling injuries.

• Tim Doutre on the world of club hockey
• Can you hit the cross-bar from halfway?

Penny represented her native South Africa at the international level but only after overcoming a laundry list of injuries, including; shoulder dislocations, achilles injury, hamstring strain, stitches in jaw (ball to chin), patella tendonitis, broken thumb and others.

These came after initial rejection as a teenager when she was overlooked for the senior national hockey and cricket teams despite playing at the highest level as a junior.

She moved to the UK where she stayed for nearly a decade.

After three years at her adopted home, a journalist (bless the journalists!) noticed her skills on the pitch and put her in touch with the South African women’s coach.

“I flew from England to South Africa knowing that I had just one opportunity to make a good impression,” she says.

“I had planned a trip to the Caribbean which was just a week before the trials, so I used my holiday as preparation.”

Penny spent the week preparing herself, focusing as much on her mental strength as her physical.

She went on to gain selection and score South Africa’s only goal on debut.

“I can honestly say that the main difference for making the national team this time was due to the mental training that I had done prior to the training camp,” she says with confidence.

Work and injury would cut her international career short, including robbing her of an Olympic debut, but the skills she developed between the ears would stay with her forever.

She now runs Hockey Performance Academy where she aims to inspire others by “sharing the lessons that I have learnt.”

“There are so many people with the ability and talent to go further in their sport but there are those little road blocks that hold people back from reaching their goals. I want to help them move past those obstacles.

“Everyone knows the importance of the mental game in sport, but few actually understand it.

“Mental training isn’t just for the elite level players, it is something that can help anyone who wants to get more out of their sport.”

Don’t psych yourself out before the game

‘’We often worry more about what might go wrong before the game even starts, than thinking about what might go well. I call these the “what if’s” – such as ‘what if I don’t play well’ or ‘what if we don’t win’ for example. Instead of worrying about the what if’s focus on what might actually go well. Maybe it’s a new skill you have been practicing that you use effectively today or what if we beat this team even though we are not expected to.

Get over your mistakes quickly

I have missed open goal opportunities before, just like any striker has but it is how quickly you can move forward and get ready for the next opportunity. If you are still thinking about the last one you missed, you will miss the next one too. For example you could focus on what you need to do to make sure you at least get it on target next time. If you aren’t a striker and you are making mistakes, go back to your basics and just focus on getting them right. Don’t dwell on your past mistakes, instead focus on the next opportunity.

Don’t get hung up on things you can’t control

Too often people focus too much on things that they can’t control. Examples include things such as the umpiring decisions, the coaches decisions, the final result, spectators, the weather, pitch condition, what your team mates say, who you are playing, what the opposition are doing, etc. Try not to over react or get frustrated by bad umpire calls, it is not something you can control. Rather draw your attention to things that you can control, like putting in 100% effort and contributing towards the team.

Good communication with yourself

We all have conversations with ourselves on a daily basis. People often say negative things about themselves without even realising it because you are so used to that way of thinking. Become more aware of the conversation that you have with yourself. For example if you make a mistake on the field do you think things like: “Ah, that was stupid” or “I am such an idiot?” Remember your mind communicates with the rest of your body which affects your body language, your behavior and ultimately your performance.

Don’t be too hard on yourself

Everyone makes mistakes and no-one is perfect so don’t go into games expecting to play perfectly or you will always be disappointed. It is more about how you react to the mistakes that you make that really counts. We need to make mistakes in order to learn so accept that they are going to happen and be ready to learn from them.

Anna Flanagan broke new ground for Australian hockey last month but she didn’t need to step on to the field to do it.

The talented 23-year-old, who has 150 caps to her name, became the first Australian hockey player to sign with Red Bull, joining high profile athletes like pro surfer Sally Fitzgibbons.

I caught up with Flanagan for a quick Q&A.

What’s the worst thing you’ve had to do at a training session?

What is your best hockey memory?

Winning gold at back to back Comm Games was pretty special, both in shoot outs! But nothing can compare to playing at the Olympic Games for me.

What do you love about getting back to your home club?

I love playing with the people I have grown up with! It’s like nothing changes even when you don’t see each other for a year. Travelling so much I really appreciate the time I get to spend with players from back home.

Who is the best hockey person on social media and why?

I am a social media tragic… But Georgie Parker is not far behind!

What is the best prank anyone in the hockeyroos has pulled?’

When we went away for a camp with our new coach at the time. A few of the girls put glad wrap on his toilet seat so when he went to the bathroom at night… You can imagine what happened.

From a Hockeyroo on fire, to Hockeyroos under fire.

Check out these kids in the Goldfields Region in WA belting balls at the Hockeyroos.

The Hockeyroos were in the area as part of the Department of Sport & Recreation’s Country Sport and Enrichment Scheme,  which brings elite athletes to remote areas of WA.

Hockey Australia’s sponsorship manager Shane Tonkin was on hand to film all the action.

Gut instinct: being hockey-fit is a misnomer