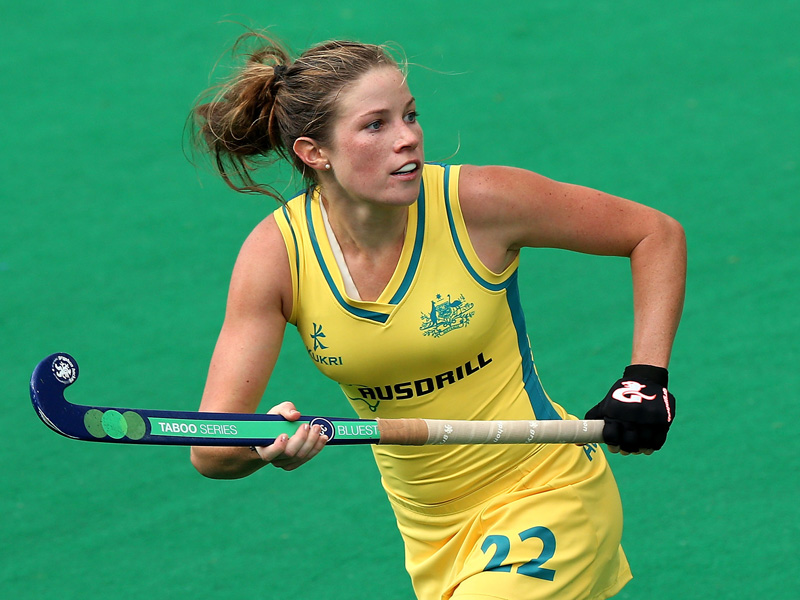 Hockey has one of the highest participation rates in the country, and Tim Doutre is one of the leading voices. In this regular column, you can expect to hear news about the hockey you play; the technology, the equipment, the rules and the rants that make the sport so enjoyable. Starting with …

Goalkeeping gear is not the place to find inspiration.

But Hockeyroos keeper Rachael Lynch may just be the exception to the rule.

The 29-year-old sports bright yellow OBO leg guards not dissimilar to those of her counterpart Ashlee Wells, however, Lynch’s feature one notable difference – the message: R U OK?

R U OK? is a not-for-profit organisation which aims to encourage regular and meaningful discussions between people to help prevent suicide. It’s a cause close to the Victorian’s heart. She has been an ambassador for the organisation for four years.

“The R U OK? message is so simple and just encourages everyone to check in with each other and make sure they are ok,” Lynch said from Perth, where she is now based.

“I love that message and want to spread it as far and as wide as I can.”

The custom made pads, which Lynch received “a couple of weeks ago” are the only ones of their kind.

“You can’t buy them,” she said. “So far they are working a treat. Obo were great in making them for me and helping spread the message.”

Talk about cutting it close.

Kookaburras star Jamie Dwyer and the rest of the Dwyer clan welcomed their new bub Zara Micaëla on March 29. The latest edition to the five-time World Hockey Player of the Year’s family was “fashionably late” and arrived less than a week out from the Sultan Azlan Shah Cup.

Dwyer was part of the Kookaburras squad that took on Canada in Malaysia this weekend. During the 7-0 drubbing of the Canadians, the Rockhampton-product bacame Australia’s most capped player, beating current Victorian Vikings coach Jay Stacy’s record of 321.

It’s another feather in the cap for the Australian star, but there’s a fair chance it won’t be the thing he remembers as the highlight of his year: “She was definitely worth the wait. Our family is now complete. Zara and Leoni you are both amazing!”

Run, run as fast as you can

One of these things is not like the other.

Goulburn Hockey Club’s Kayleigh Hadlow has not been wearing the traditional red socks that her teammates so proudly don.

The 18-year-old from NSW has been wearing gingerbread man socks since mid-March but this is not a homage to the adorable character in Shrek (“not the gumdrop buttons”). Hadlow is raising money for the Starlight Foundation which brightens the lives of seriously ill children.

So why gingerbread men?

“I saw these socks at Kmart on sale and wanted to buy the rest – 27 pairs,” the goalkeeper said.

“I decided I would wear them to school every day for the rest of year 12, and decided while doing it I should raise some money for charity.”

Hadlow has been wearing the socks since preseason started in February and they have made an appearance in about seven Goulburn Hockey Association games.

“I chose the Starlight Foundation because I know they do a lot for sick children, and I thought it would be great to help put a smile on their faces.

“A lot of people have noticed my socks while I’m putting my goalie gear on, which is great because then people know why I’m wearing my gingerbread socks – to raise money or the Starlight Foundation.”

Hadlow is aiming to raise $700. To help out visit her donation page.

Many teams around the country have begun their seasons while some are just itching to start. But if you’re looking for that all important edge, then look no further than this video courtesy of Hockey NSW. It shows last year’s NSW under 13 girls team on their way to their grand final. What better way to gain the competitive edge than a team sing-along? Caution: not for the feint-hearted.

Got a hockey tip? Let Tim Doutré know on twitter at @TimDoutre or on facebook at https://www.facebook.com/TimDoutreJournalist

Sticks and stones: inside the world of hockey