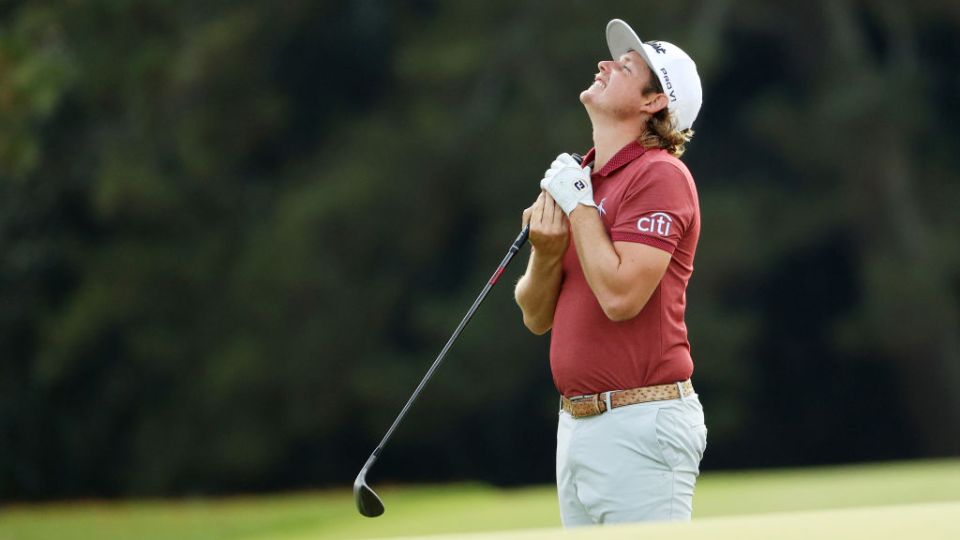 Australia's Cameron Smith had plenty to lament after his third round slump. Photo: Getty

Cameron Smith is plotting a birdie blitz after his British Open dream threatened to turn to despair following a demoralising third round at St Andrews.

Australia’s great hope had his two-shot halfway lead reduced to a four-stroke deficit with a rueful one-over-par 73 on Saturday.

Smith’s round, full of close shaves and wretched luck, was the equal-worst of any player in the top 20 and left the world No.6 needing to play catch-up on championship Sunday.

Pre-tournament favourite Rory McIlroy and Norwegian young gun Viktor Hovland surged past Smith with a pair of 66s to reach 16 under, giving the co-leaders a four-shot buffer over the chasing pack.

Smith will play with Cameron Young in the second-last group on Sunday after the American’s 71 also left him at 12 under.

No player has ever claimed the Claret Jug from more than four shots back entering the final round in 29 editions of the Open at the home of golf.

That at least leaves Smith with hope after his chances appeared to be slipping away on the back nine on Saturday.

Disaster struck when he double bogeyed the par-four 13th to slump five shots behind.

With no stance, he was forced to play his approach out of the bunker and tugged his ball into a heather bush.

He hacked out in anger into more rough on a bank in front of the green, and failed to get up and down.

Smith then needed two more shots to find the green before missing his bogey putt.

But a desperately needed bounce-back birdie on the 15th and Road Hole trouble for McIlroy on No.17 has kept the Queenslander in the hunt.

Ranked second on the PGA Tour for birdies this year, Smith knows he must reach deep into his bag of tricks to have any hope of claiming the title.

“I need to stay aggressive. Maybe have a slightly different game plan off a couple of tees and just try and make a ton of birdies.”

Smith set the tone for his flat round with an uncustomary three-putt bogey on the very first hole.

After making an unofficial PGA Tour-record 255 feet worth of putts on Friday, Smith couldn’t get his magic wand working in round three.

He couldn’t buy a putt and managed only one birdie in 21 holes from the 10th on Friday through the 13th on Saturday.

The dismal return was a far cry from the 11 birdies he compiled en route to setting the new Open 36-hole scoring record at St Andrews during the first two rounds.

A missed-eight footer for birdie at the 18th typified Smith’s frustrations on the greens and had the usually unflappable star cursing his misfortune as the Claret Jug continued to slip further from his grasp.

Abandoned by the gods of golf

“The golfing gods weren’t with me today. I felt like I hit a lot of good putts with nothing really dropping,” Smith said.

“I stuck in there pretty good and I hit the ball pretty good. It’s probably actually the best I’ve hit it all week. Had lots of opportunities, just no putts were dropping which was quite frustrating.”

Adam Scott is the only other Australian in with a sniff after a fighting round of 70 left the former world No.1 seven shots off the pace at nine under in a tie for eighth.

HOW AUSSIES FARED IN THE THIRD ROUND:

Alan Kohler: The hubris of central bankers and the limits of money
Lleyton Hewitt joins the legends in Tennis Hall of Fame
Today's Stories