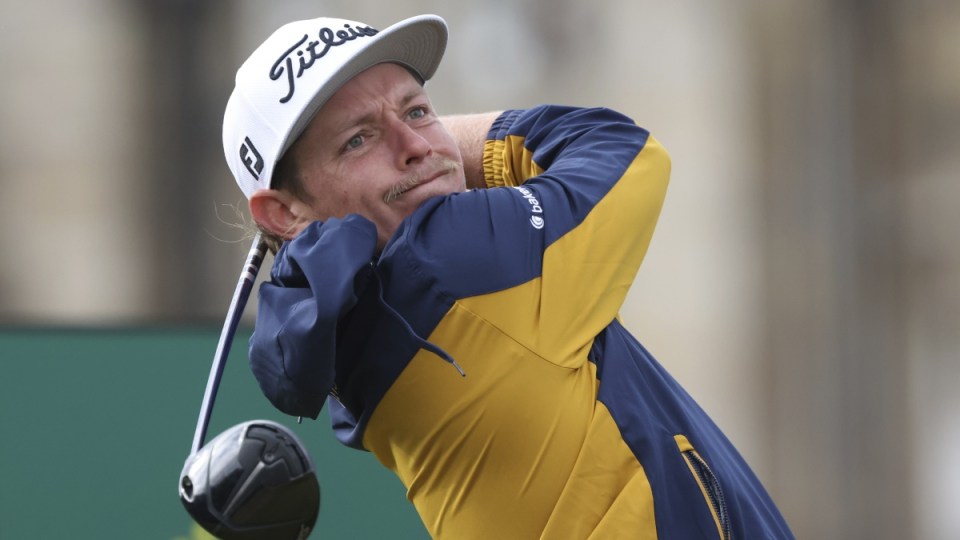 Australian Cameron Smith lets rip with his tee shot on the second hole during the opening round of the British Open at St Andrews. Photo: AP

Cameron Smith has played down injury concerns and raised hopes of a long overdue Australian British Open triumph with his best start yet to the links-course major.

Smith offset a lone bogey with six birdies to once more put himself in the mix for an elusive maiden major title following a third at this year’s Masters and tie for 13th at the US PGA Championship.

The world No.6 reached the turn in three under with birdies on the second, fifth and seventh holes and sandwiched his only dropped shot on No.11 with further birdies on 10 and 12.

Smith’s injury scare came on the par-5 14th when he grabbed at his knee after hacking out of deep rough.

“I’m fine now but it just felt like I got a little bit of a hyper-extension in the back of my knee,” he said.

“It lasted a couple of holes but I’m a Queensland man – I’ll get over that pretty quick.

“Just a little niggly for 10 minutes and it went away.”

Despite the fright, Smith avoided dropping a shot with a lovely approach with his second out of the rough, then iced his round with a sixth birdie after driving the short par-4 last.

“It’s nice to get off to a hot start any week, really,” he said.

“But these majors, the tougher the course gets, especially around here, how it’s going to get really firm and really fast, it’s almost going to be like holding on, I think, on the weekend.

“So nice to get out there and shoot a number and get myself well under par.”

Missed any of this morning's action?

Don't worry, we've got you covered. Enjoy some of the best shots from the early starters👇#The150thOpen pic.twitter.com/MM7MazvuSF

The 2022 Players champion was especially pleased with his putting.

“Hit lots of good lag putts today. It was probably some of the best lag putting I think I’ve ever done,” Smith said.

“My putt on the second managed to go in from a fair distance. That was pretty decent.

Brad Kennedy was the next best of the Australian morning starters after also taking advantage of early tee times to post a four-under 68.

Kennedy bagged eight birdies to be just one stroke behind Smith.

Min Woo Lee was the next best of the Australians after taking advantage of his early tee time to post a three-under 69.

Lee double-bogeyed the par-4 third but reeled off three birdies and an eagle to briefly claim the clubhouse lead.

“It was a good recovery, a great recovery,” he said.

“The one thing I haven’t been good at is bouncing back from bad shots. So hitting nine iron into the next hole and making birdie there kind of kicked off the round.”

Former runners-up Adam Scott and Marc Leishman, who lost a three-man play-off last time the Open was staged at the home of golf in 2015, both had afternoon rounds with American LIV Golf rebel Dustin Johnson.