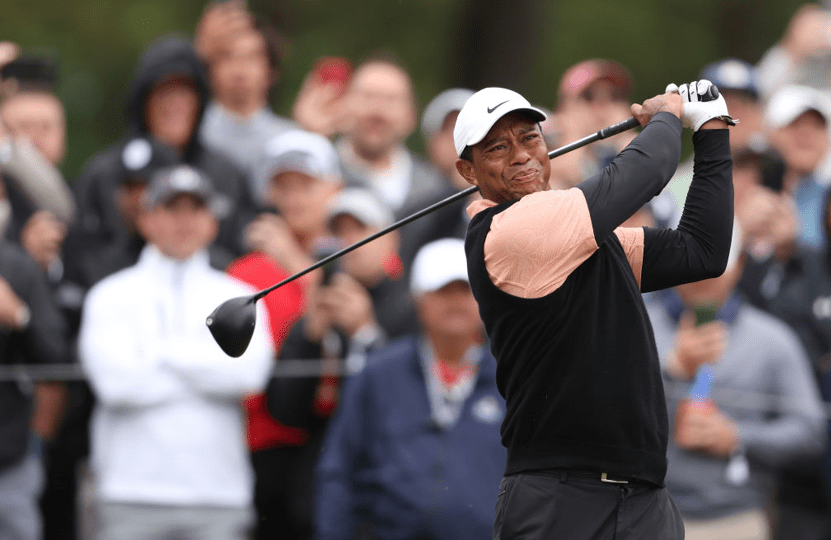 Tiger Woods grimaces as another tee shot goes astray during his disastrous round in Tulsa. Photo: Getty

A hobbling Tiger Woods had withdrawn from the the US PGA Championship after a career-worst 79 in the third round at Tulsa’s Southern Hills course.

In obvious pain, Woods limped his way around in the cold and wind, at one point making five straight bogeys.

It was the first time Woods has withdrawn from a major as a professional.

He declined interviews after his round, speaking only to a pool reporter.

Woods was asked if he felt as though he would play the final round. All he said was he was sore, he would do some work and see how it went.

Woods has made the cut in the two majors he has played since his right leg was shattered in a car crash 15 months ago.

He had to play his last four holes on Saturday in one-under par simply to break 80 after making five bogeys in succession in a major for the first time in his professional career.

After holing from 13 feet to save par on the first, Woods drove into the creek which bisects the second hole and made a bogey five following a penalty drop, before finding more water on the par-three sixth.

Woods then missed the green with his third shot from the drop zone on his way to a triple-bogey six and dropped another shot on the next to slide further down the leaderboard.

The chilly weather was doing Woods no favours due to his extensive history of injuries and bogeys at the seventh and ninth – where he thinned his second shot into the face of a bunker – completed a miserable front nine of 41.

Four more bogeys to start the back nine left Woods in danger of recording his worst score in any major, his unwanted mark of 81 set in terrible weather in the 2002 Open Championship at Muirfield.

Yet in typical fashion he refused to throw in the towel, holing from 35 feet for his first birdie of the day on the 15th and celebrating by sardonically holding one finger in the chilly air.

He then finished with three pars to card his worst US PGA score, eclipsing a 77 in the first round in 2011.

“I didn’t hit the ball very well and got off to not the start I needed to get off to. I thought I hit a good tee shot down two and ended up in the water, and just never really got any kind of momentum on my side.”