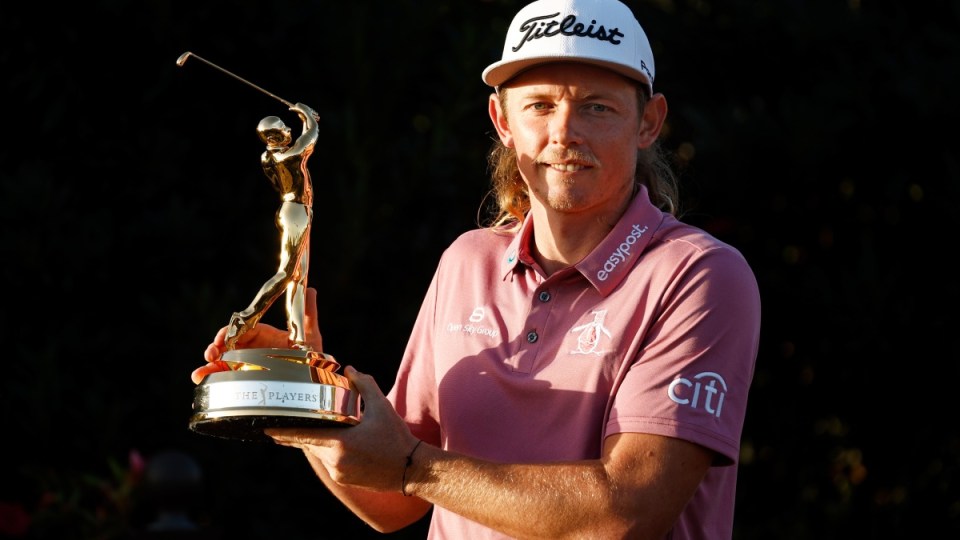 Australian golf star Cameron Smith has produced a performance for the ages to score the biggest win of his career, taking out The Players Championship in Florida in extraordinary, record-setting fashion.

Smith carded a birdie-filled and dramatic six-under-par 66 to record a steely one-shot victory at TPC Sawgrass and join a who’s who of golf greats on the honour roll.

He finished at 13 under for the tournament, with plucky surprise third-round leader Anirban Lahiri settling for outright second after closing with a 69.

Englishman Paul Casey (69) was third at 11 under, with American Kevin Kisner (68) a further shot back in fourth and Keegan Bradley (68) rounding out the top five at 9 under.

Apart from the prestige of winning the PGA Tour’s flagship event and the game’s unofficial fifth major, Smith pocketed a cheque for $US3.6 million ($A5 million) and will rocket to second in the season-long FedExCup standings.

Described by awestruck US commentators as “other unworldly”, Smith’s roller coaster round in the tour’s wild Monday finish after a weather-marred week featured an unprecedented 10 birdies on the Stadium Course, including five in the first six holes.

But the victory wasn’t without endless tension, with Smith finding the water on the 18th hole and needing a scrambling up-and-down bogey to fend off Lahiri.

Fittingly, he delivered to complete the best putting display in the tournament’s 49-year history.

Smith’s 101 putts for the 72 holes was the fewest by any winner in almost half a century.

“It’s huge. It’s gonna take a while to sink in I think,” Smith said.

The Queenslander choked up after describing the emotion of winning in front of his mother and sister, who were visiting Smith, who lives nearby at Jacksonville Beach.

“I haven’t seen them in two years so it’s really cool to have them here,” he said.

“My main priority really was to hang out with them and golf was second these few weeks so it’s nice to see them and get the win for them.”

Smith’s latest triumph follows his victory at the Tournament of Champions in Hawaii in January, when he won with a record score of 34-under par.

The Australian No.1 is set to climb into the world’s top five for the first time before next month’s Masters, the year’s first major at Augusta National.

But Smith couldn’t put a price on his fifth PGA Tour win, especially after enduring such a nerve-wracking final round.

Resuming his third round on the 11th hole after five days of ferocious wind and rain, Smith birdied the island green par-3 17th to pull within two shots of Lahiri entering’ the final round.

With birdies at the first four holes, then another on the sixth, Smith suddenly found himself two strokes in front.

But he made three consecutive bogeys to fall back as Lahiri, Casey and Bradley also hit the front at different stages.

Bradley’s comeback was nothing short of amazing, after the former PGA Championship winner slipped to one over for the championship during his third round.

After reaching 12 under, though, Bradley unravelled with a three-putt on the 17th and then dumping his ball into the water on 18.

Smith appeared to be running way with the trophy with a string of four birdies to start his back nine and then recovering from a duck-hook tee shot on the 16th to make a miraculous par.

But after draining his 10th birdie on the signature 17th hole, Smith had to dig deep at the last.