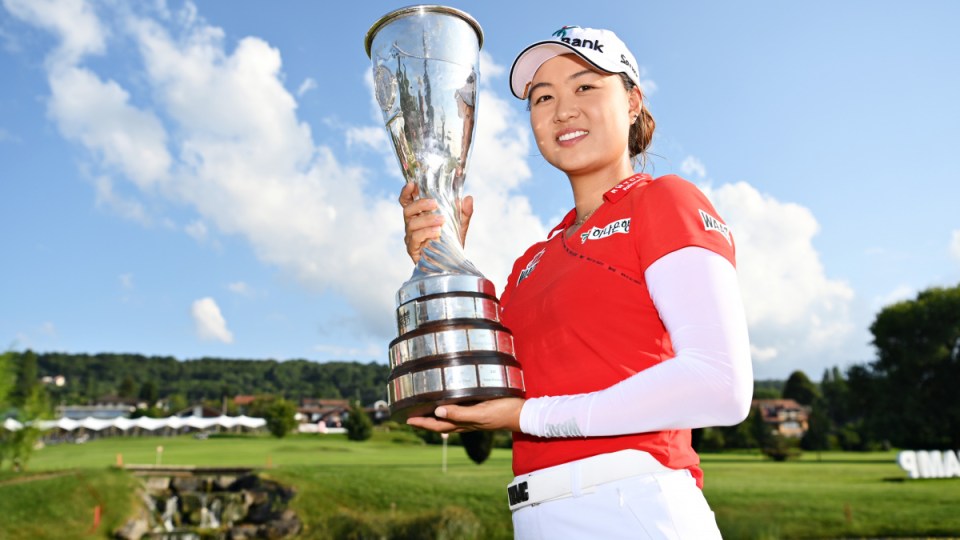 Australian golf star Minjee Lee has earned the major championship that her talents have long demanded, lifting the Evian Championship in France with one of the all-time great comeback performances.

The 25-year-old from Perth, often considered the best woman player never to win one of the five majors, got rid of that unwanted tag with a bravura display at Evian-les-Bains which saw her shoot a flawless final round seven-under 64 and then win a sudden death play-off at the first hole.

Roaring back from a record-equalling seven shots behind on Sunday, she caught up with the week’s stand-out performer, South Korea’s Jeongeun Lee, as the pair both finished on an 18-under par total of 266.

“I’ve been waiting for this for so long, it just feels unreal to have won, amazing!” said Lee, after her popular triumph saw her doused in bubbly by pal Lydia Ko before she took a swig of champagne herself on the 18th green.

“Winning a major’s easier said than done! They’re all so good out there,” added Lee, who finished third in both the 2017 ANA Inspirational and last year’s Women’s British Open.

“I never really thought about winning while I was playing. I just tried to make as many birdies as I could. I think I only saw the leaderboard once or twice.”

It made for good reading as she, Lee6 and teenage American Yealimi Noh all battled for the title, although the Australian had initially no thoughts of joining seven-time winner Karrie Webb, three-time champ Jan Stephenson and Hannah Green in the Aussie major winners’ circle.

Yet she set the pace with her seven birdies as well as a superb par-saving 10 footer at the 17th to keep her challenge on track.

At the 18th, Lee drove into the trees, but pitched out and got up-and-down for a fourth birdie in five holes, briefly holding a two-shot lead to put all the pressure on her two pursuers.

Lee6 had suffered a meltdown to see her overnight five-shot lead over Noh – and seven over Lee – disappear but fought back courageously at the end of her round with three closing birdies.

Yet the Western Australian Lee, who’d played the best golf over the weekend with a 65 on Saturday and 64 on Sunday, was nerveless at the first playoff hole, drilling her six-iron second at the par-five 18th to within eight foot of the pin.

It proved a glorious tournament winner – thanks to her caddie Jason Gilroyed. “I had a bit of adrenaline,” Lee laughed. “I actually said, ‘five iron’ but Gilly said ‘six’ – so I went with the six-iron. Thank you, Gilly!”

Lee6 could only respond by catching her second shot thin to find the lake guarding the green. Lee got down in two but Lee6 could only take a drop and finish with bogey.

It was another family triumph after younger brother Min Woo Lee’s win on the men’s European Tour in the Scottish Open a fortnight earlier.

“They were all cheering for me back home, but apparently my dad was like, ‘she’s going to get into a play-off and win’ – so he kind of called it! They were really happy and a little bit teary, as happy as I am,” smiled Lee, who also received a text of congratulations from Australia’s greatest player Webb.

A five-time winner on the LPGA tour but without a win on the circuit for two years, the world’s former No.1 amateur Lee was the next tipped for a major breakthrough following Green’s 2019 Women’s PGA victory.

After a brief stopover at her US base in Dallas, Lee’s next stop will be to go for gold at the Tokyo Olympics.

Extraordinarily, Lee’s round wasn’t even the best of the day. That honour went to Ireland’s Leona Maguire, whose 10-under 61 tied the lowest round ever by a female or male in a major – two days after Lee6 had done the same in the second round.