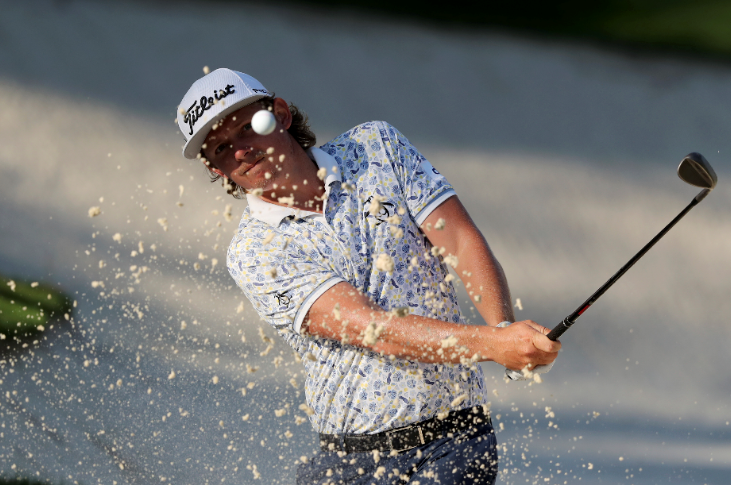 Cameron Smith shows how it's done, flicking the ball out of a tricky bunker at the Masters. Photo: AP

Cameron Smith was just a two-year-old toddler when Greg Norman coughed up a six-shot 54-hole lead to lose the Masters in dramatic fashion.

Mention of the fateful day still brings his golf-mad father Des close to tears, but Smith hopes some history repeats this Sunday at Augusta National.

World No.1 Dustin Johnson put up an unflappable seven-under-par 65 third round to burst out of a logjam at the top of the leaderboard and take a commanding four-shot lead with a round to play.

Smith put on a gutsy scrambling display playing in the final group of a major championship for the first time, carding a three-under 69 to move to 12-under.

From 247 yards to mere feet. Cameron Smith's first eagle at Augusta National on No. 15. #themasters pic.twitter.com/E8jW9M5bYZ

While it’s a tall order for Smith, Johnson has a history of coughing up 54-hole leads, a fact not lost on his chasers.

This will be his fifth major in this position and he failed to close out the previous four. His lone major, the 2016 US Open came when he started the final round behind.

Johnson led the 2010 US Open by three but finished tied eighth after a final-round 82.

He was tied for the lead in the 2015 US Open but three-putted the final hole to lose to Spieth. He also went from first to third over the last round of the 2018 US Open and first to runner-up in the 2020 PGA Championship.

“But there’s going to be plenty of boys firing (at him) tomorrow.

“My old man still talks about it Norman’s collapse now. He missed a day of work because of ‘Greggy’ but, yeah, (collapses) happen.

“This is a place that’s going to get trickier tomorrow. The fairways are starting to firm up. The greens still aren’t quite there, so we’ll see what we’re dealt with tomorrow and take it from there.”

Unable to get out of neutral over the opening 12 holes, Smith broke his run of pars with birdies at the par-five 13th, the par-four 14th and the par-five 15th before showcasing his incredible short game.

The 27-year-old got up and down from a downslope right of the 16th green, did the same after playing down the wrong fairway on the 17th and finished with a sand save to a tight pin on the last.

“Those three saves on the last three holes hopefully mean something tomorrow.

Smith is looking to become just the second Australian behind Adam Scott to win the Masters.

“It’s what we dream about. I really just can’t wait for tomorrow,” he said.

“We’ll obviously need a hot start and then the back nine has been kind to me all week, so hopefully it can be kind to me one more day.”

Marc Leishman, at four under, and Scott, three under, are the only other remaining Australians, but both are too far back to mount a challenge.

Cameron Smith loses Masters lead, but Aussie isn’t out of the fight