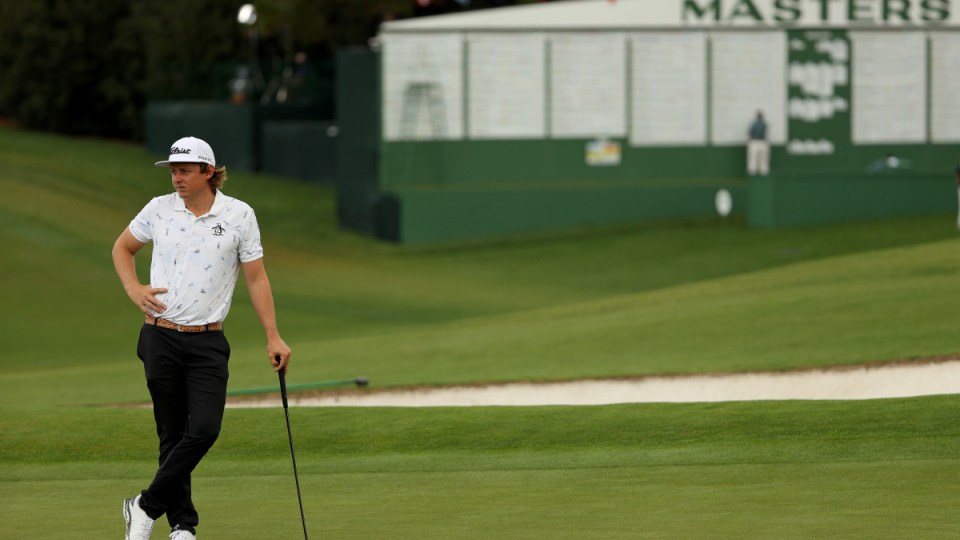 Cameron Smith has forged his way to the top of a star-studded leaderboard. Photo: Getty

Cameron Smith launched his seven-wood into orbit at Augusta National’s famed par-5 15th hole and for a second was annoyed as it pulled slightly off his intended line.

No doubt the 27-year-old was briefly concerned he could end up in a watery grave like countrymen Adam Scott and Jason Day had before him – a fate that may have ended his green jacket hopes.

He need not have been concerned.

The sensational shot from 225 metres out thumped into the green just 30 centimetres from the hole and stuck there, setting up an eagle that would kick-start a blistering finish to Smith’s round and leave him tied for the lead.

Smith birdied the next three holes as well to cap off a brilliant day where he completed an opening round five-under 67 with an afternoon 68 to finish at a nine-under 135 halfway total alongside world No.1 Dustin Johnson, fellow American Justin Thomas (69) and Mexican Abraham Ancer (67).

“I was actually trying to hit it about 20 or 30 feet right and the wind kind of caught it a little bit more than I liked, but it ended up being good,” Smith said of the iconic shot that was very close to just the second albatross ever on the 15th hole.

The only one remaiins the famous “shot heard around the world” by from Gene Sarazen at the 1935 Masters.

It was the tonic Smith needed.

Earlier he had made three bogeys in four holes around the turn and was coming off another bogey on the 14th. But he refused to give up.

“It could have got away from me, it’s almost your tournament and done and dusted. I just dug deep and the reward was there at the end,” Smith said.

“I like to feel like I’m getting the most out of my round. I don’t generally try and push anything aside. I try and work for it, even if it’s a 10th of a shot, I want it.”

Els, who famously went five straight years at Augusta National finishing inside the top six without winning a green jacket, captained the International Presidents Cup team at Royal Melbourne last year of which Smith was a member.

“All of the guys from my team are capable of winning and that includes Cam. He was brilliant in singles beating Justin Thomas so he knows what he can do,” Els said.

“If you listen to the coverage, not many people are giving these guys a chance but let me tell you they have shown their capabilities and have found some enormous confidence in themselves in recent times.

“Hopefully they all keep the doggedness for the weekend, which I am sure they will, as they have all got a chance to win the green jacket now and that would be great.”