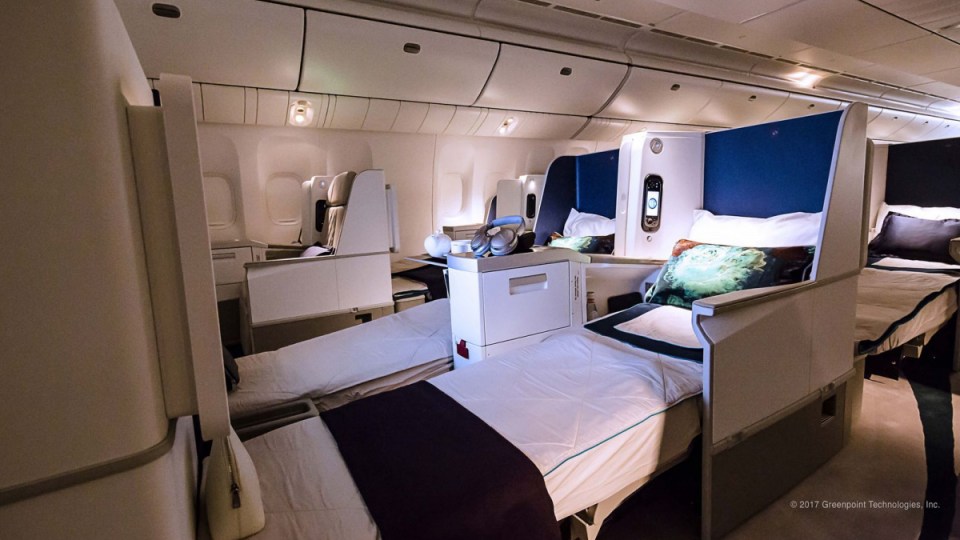 It’s swankier than the most opulent clubhouse you’ve ever visited.

Golfing superstar Tiger Woods touched down in Melbourne this week to play in the President’s Cup – and his mode of transport has set tongues wagging.

Woods normally slums it in his Gulfstream G550 — an 18-seater worth about $US54m ($79m) — but for this tour traded up to an 88-bed colossus dubbed Crystal Skye to make his team’s way from the Bahamas.

Given the flight time to Melbourne is approximately 20 hours, the journey will have set the world’s most successful golfer back A$1.6 million.

But is it worth an asking price well above par?

Woods has called the aircraft a “luxurious tin can” and no expense has been spared in decking it with all the conveniences needed to make a long flight as pleasant as air travel gets.

The customised Boeing 777-200LR sports 88 handcrafted, fully reclining seats, a champagne bar, a social lounge, a team of butlers and a gourmet kitchen staffed by an executive chef.

Each seat comes with its own 24-inch HD monitor (the largest in the industry), along with individual USB and power ports to each seat.

Should the players be a little peckish or parched, a customised international cuisine and a selection of wines, champagnes, beers and spirits is at their fingertips.

Woods is competing in the President’s cup at Royal Melbourne, where a team of US golfers will contest the cup against an international selection.

It’s the 13th year the President’s Cup has been contested and it’s the third time both teams have battled it out at The Royal Melbourne Golf Club.