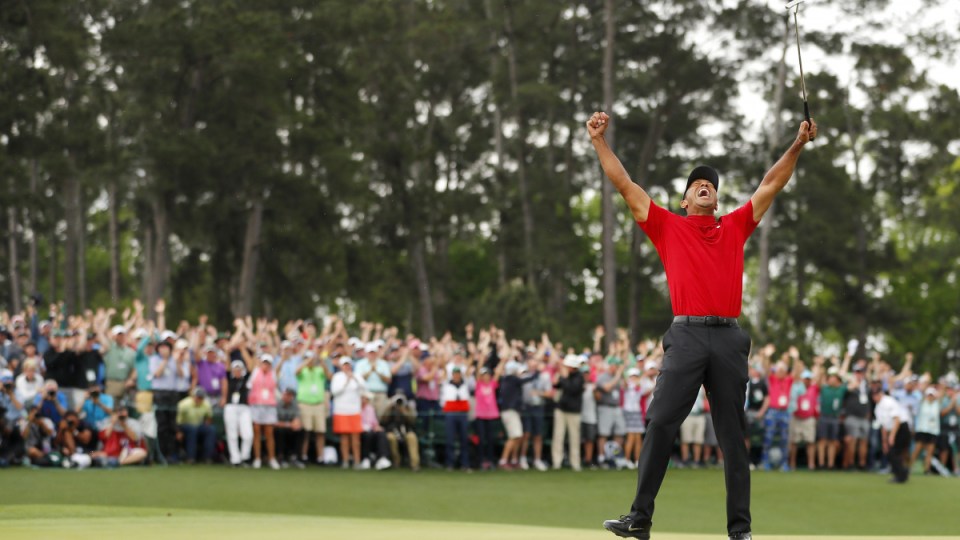 Tiger Woods has snared his first major victory in more than a decade, creating what has been called one of the greatest comebacks in sporting history.

The US player claimed his 15th major championship and fifth Masters title at Augusta National in Georgia on Sunday (Monday morning AEST).

The crowd roared and Woods lifted his arms in victory as he sent away the final putt that would secure him his first major since 2008.

After a hug with his caddie, Joe LaCava, he embraced his family, eagerly waiting in the crowd: son Charlie, daughter Sam, and his mother Kultida. All the while, onlookers were chanting his name.

It was an emotional moment for Woods on many levels, as he revealed in an interview in the course’s historic Butler Cabin post-game.

“To have my kids there was I’ve come full circle,” Woods said.

“It’s overwhelming. Because of what transpired last year – I was lucky to be playing again.”

Woods’ playing future was shrouded in doubt last year, as he underwent his fourth and most serious back surgery: a spinal fusion to relieve pain in his back and legs.

Twelve months on, those fears appeared all but forgotten as the Tiger Woods the sporting world has been captivated by since his debut stepped back onto the green.

Woods went into the final day on the back foot, with his playing partner Francesco Molinari leading and looking to take home the green jacket.

The day was also under threat from looming storms, with some commentators fearing the Masters could be pushed into a rare Monday (US time) finish.

The day’s play was as turbulent as the forecast, with five players sharing the lead at one stage. Even Australia’s Jason Day looked a chance, ducking into the lead early on.

Favourite Molinari had the worst of luck. His day was marred by bogeys and water-logged balls.

It wasn’t until the last half of the course, and indeed the final few holes, that Woods looked a chance at winning. On 15, he scored a birdie, making it 13 under and taking the lead outright.

Fellow US player Dustin Johnson looked threatening on 18, but missed the chance to tie with Woods when he missed a birdie putt.

At 16, Woods got a tee-shot within a couple of feet of the hole, and it was all but over.

“I’m a little hoarse from yelling. I was just trying to plod my way through the course all day,” Woods said.

“Then I was trying to get a five on the last. And when I made the putt I don’t know what I did but I screamed.”

It’s the latest in a series of good news stories for Woods, who was not only hampered by surgeries but had his personal life and therefore career dogged by scandals over the past decade.

In September, he made a remarkable comeback, winning at the Tour Championships, his first win in 1876 days.

Now at age 43, Woods is within three wins of Jack Nicklaus’ all-time record 18 victories and one behind Sam Snead’s record 82 US PGA Tour wins.

‘What a hit’: Albanese on attack after dire wages data
Inquiry into mother’s convictions over deaths of four children
Viagogo loses appeal over $7 million penalty
Sydney home sprayed with bullets in gang violence
‘Admit what the hell is going on’: Biden wants US to face White Supremacy problem
Device detonated, man arrested in Brisbane sieges
Adam Scott and Jason Day get the wobbles as Tiger Woods closes in on Masters lead
Today's Stories