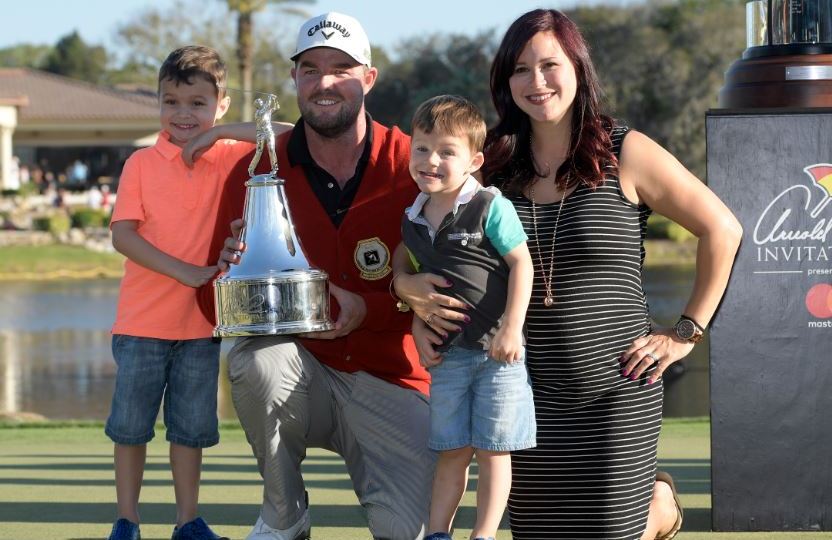 Marc Leishman's first thoughts were of wife Audrey and sons Oliver and Harvey when the false alert arrived.

Australian golfer Marc Leishman didn’t receive the false alert of an incoming missile that inspired panic among players, officials and fans at the PGA Tour event in Honolulu – but his wife, along with other players, did.

Leishman and his family immediately headed downstairs from their hotel room.

“It’s an interesting feeling, isn’t it?” said the world’s 12th-ranked golfer, describing the incident as “a pretty big mistake”.

“It sent some different thoughts through your head: a few extra hugs for the kids.”

Leishman is one of six Aussies competing in the PGA Tour’s Sony Open at the Waialae Country Club on the island of Oahu, along with Cameron Smith, Matt Jones, Steve Allan, Greg Chalmers and Aaron Baddeley.

American Charles Howell III was eating breakfast in his hotel when the restaurant at the Kahala started buzzing.

“All the alarms went off at the same time,” Howell said.

“It got everyone’s attention. I didn’t know what to do. We all stared at each other.

“It kind of shows you the world we live in now. Your whole life can change in a second.”

A second text message from the Hawaii Emergency Management Agency confirmed it was a false alarm – although it did not arrive for some 38 minutes.

American John Peterson – who sits in a tie for second after two rounds, three shots behind leader Brian Harman – is in Honolulu with his three-month old baby and was clearly shaken by the experience.

Peterson wrote on Twitter: “Under mattresses in the bathtub with my wife, baby and in laws. Please lord let this bomb threat not be real.”

After receiving confirmation of the false alarm, Peterson added: “Man. How do you press the wrong button like that. COME ON MAN.”

There was nothing to see though that was a consideration for American world No.4 Justin Thomas and Russell Knox.

The Scot said his wife was walking on the beach when she called him and told him to turn on the news.

“I went out to the balcony expecting to see a missile flying toward Waikiki,” he said. “You never really think that’s going to happen. But my heart rate went up a little bit.”

Thomas, the PGA Tour player of the year, said the missile threat had everyone “freaking out”.

“It’s the first time I guess you can say my life flashed before my eyes. It was a little dicey,” he said.