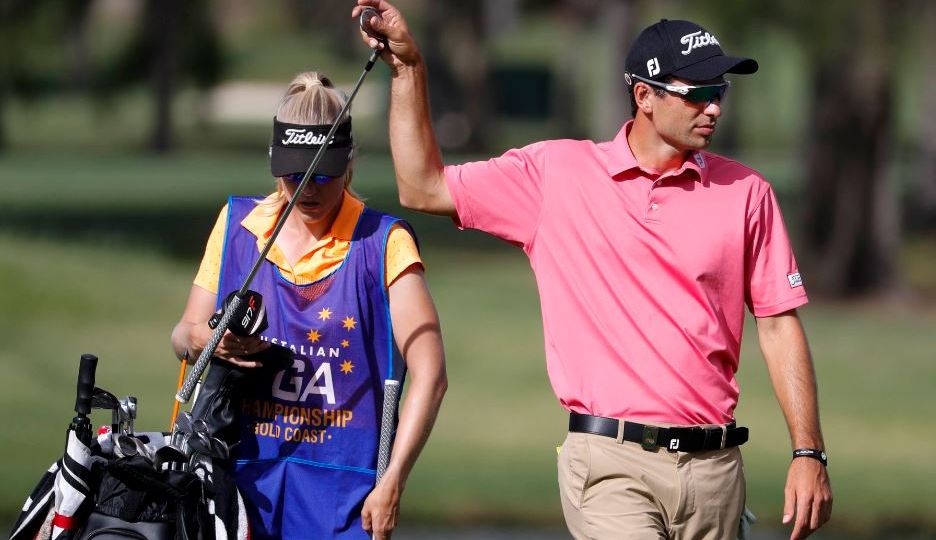 With the swagger of a gunslinger holstering a hot pistol, Jordan Zunic stows his iron after yet another sweet shot. AAP/Glenn Hun

A sizzling 64 from Jordan Zunic has seen him take control of the Australian PGA Championship with one round to play.

The 25-year-old from Wollongong defied the tricky winds at Royal Pines to dominate on Saturday with 11 birdies to finish 17 under.

But it could have been so much better, Zunic on track for a rare sub-60 round until a bogey, double bogey finish on an otherwise flawless day.

It was still enough to equal the course record set by Rhein Gibson in 2015 and build a four-shot lead over Queenslander Cameron Smith, who shot a five under 67.

Zunic, who played the European Challenge Tour this year, was on fire early after shooting 29 on the front nine to build a four shot lead at the turn.

A six-metre par-saving putt on the 12th after finding the water rebooted his back nine as Zunic recaptured his groove to birdie the next four and keep hopes of a sub-60 round alive.

He needed to birdie the last two for a round of 59, a prospect not in contention at an Australian championship since Ernie Els shot 60 at the 2004 Heineken Classic at Royal Melbourne.

But he twice found sand on the 17th to scupper those dreams with his first bogey of the day before a three-put on the 18th gave his rivals hope.

The Sydney-based Zunic has already endured an eventful career.

In 2013, while playing as an amateur in the United States, he suffered severe head injuries and blood loss as a passenger in a car crash.

Two years later he won the New Zealand Open and now, two years on from that win, the Australian PGA Championship is his to lose.

Admitting to be struggling with form this season, Zunic said earlier in the week that reading a book written by fellow pro Nick O’Hern had brought clarity to his game.

Lurking in outright second is 24-year-old Smith, who has remained steady across three days and now sits clear of overnight leaders Marc Leishman (10 under) and Adam Bland (13 under).

Leishman was par through his first nine holes but grew looser as his round continued to finish two over for the day after a superb 65 on Friday.

Sergio Garcia was two under for the day, but at eight under is now well off the pace.

With storms expected on Sunday, organisers have made the call to start off two tees from 6am and 8am AEST – three hours earlier than planned – in the hope of crowning a winner before the rain arrives.