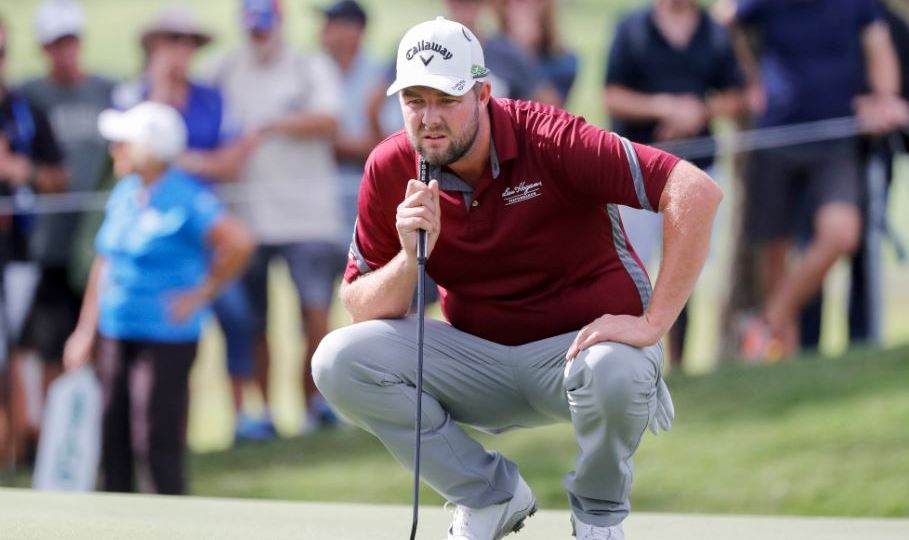 Marc Leishman mulls a putt on the second day of the Australian PGA Championships on the Gold Coast. AAP/Glenn Hunt

Marc Leishman is just warming into his Australian PGA Championship tilt while former winner Adam Scott’s campaign is already over.

The pair had starkly contrasting rounds at the Gold Coast’s Royal Pines on Friday – Leishman’s aggressive 65 gave him a share of the lead while Scott limped home with a 74 to miss the cut.

Australia’s newly crowned golfer of the year produced seven birdies and an eagle in a seven-under-par round as he looked to attack the Gold Coast course at every opportunity.

But overnight co-leader Adam Bland of South Australia kept pace with a second consecutive 66 to leave the pair locked in front at 12 under.

They are two shots clear of two-time winner Greg Chalmers while Masters champion Sergio Garcia is still in the mix at six under for what will be a 78-man field on Saturday.

Leishman had the ball on a string on Friday, routinely nailing iron approaches to within a short putt of the flag to go five-under through the first eight holes.

He found water when using a wood with his second shot on the 12th while hunting an eagle, with another bogey on his ninth hole his only blemishes.

The world No.13 was largely error-free after the turn, putting his iron within one metre of the flag on the par-three fifth to follow solid birdies on the first and third holes.

“I’m striking the ball well and I thought I’d be pretty aggressive all day, especially after birdying the first two holes,” Leishman said.

“When you’re on a run like that and playing well I guess you can afford to be aggressive … if you make a few mistakes you feel like you can make some birdies.”

Leishman, who won the Greg Norman Medal on Tuesday, made the call to pull out of the lucrative Hero World Challenge and contest an event he holds close to his heart.

“I think that would be the big thing … to win a tournament that you’ve grown up watching on TV, that you’ve gone to as a kid,” he said.

“I think it would be huge.”

Meanwhile, Scott can’t wait to get away from golf and spend time with his young family after his worst season since 2010, when he last missed a cut in Australia.

The world No.31 started the day one under and just five shots from the lead.

But he was wayward off the tee all day and eventually caved with four bogeys in the final seven holes in a premature finish to the tournament he won in 2013.

His next tournament is likely to be Los Angeles’ Genesis Open in February.

“I’ve got to lift my ball striking up. I lose too many shots and that’s the strength of my game,” he said.

“I’ve got to get that back up to standard and it’s going to take some work.”