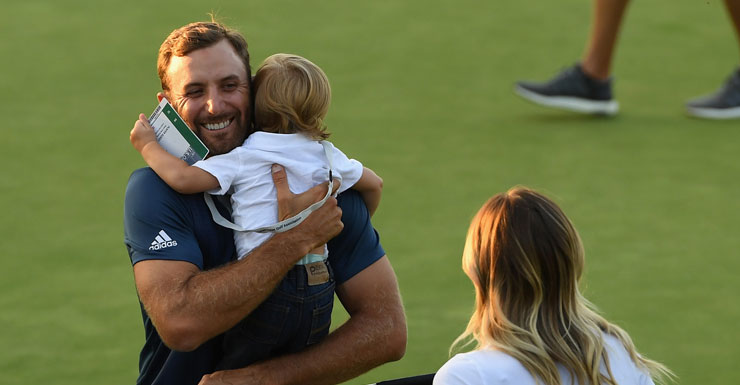 World number six Dustin Johnson has won his first major tournament, clinching the US Open by three shots at Oakland in Pennsylvania.

Johnson fired a final round 69 to finish at 4-under-par overall, ahead of Shane Lowry, Jim Furyk and Scott Piercy (1-under).

But controversy reigned for much of the final round thanks to a practice putt which put Johnson under the spotlight of the USGA officials.

Replays showed the practice shot, on the green of the fifth hole, narrowly passing Johnson’s ball, before it moved ever so slightly backwards, calling into question whether Johnson had made contact with it.

A decision would not come either way for Johnson until after his 18th hole, but his winning margin was more than enough to negate the penalty, which knocked him down from a 5-under 69 to a 4-under 68.

In winning the tournament, Johnson became the first man since Tiger Woods in 2007-2008 to win the US Open after finishing as runner-up the year before.

Johnson has previously finished fourth at the 2016 Masters, second at the Open Championship and fifth at the PGA Championship.

Click the owl to see Johnson’s run of top-10 finishes at major tournaments.

Irish overnight leader Shane Lowry lost his four-shot margin over the rest of the field inside his first nine holes, as he failed to find a rhythm on the tricky course with seven bogeys and just the one birdie to finish at 1-under.

Lowry became the first 54-hole course leader with a four-shot lead or greater to not win a major since Payne Stewart in 1998.

Australia’s Jason Day started slowly with two bogeys and a birdie in his opening nine holes, but burst into life on the 12th with a chip-in eagle, followed by another birdie on the 13th.

But his charge dissipated after a succession of pars, before double bogeying the 17th to ultimately finish at 2-over-par overall with a final-round 71.

Day’s compatriots Adam Scott and Marc Leishman both finished in a tie for 18th place at 6-over-par. Leishman fired a final round 69, while Scott carded a 74.