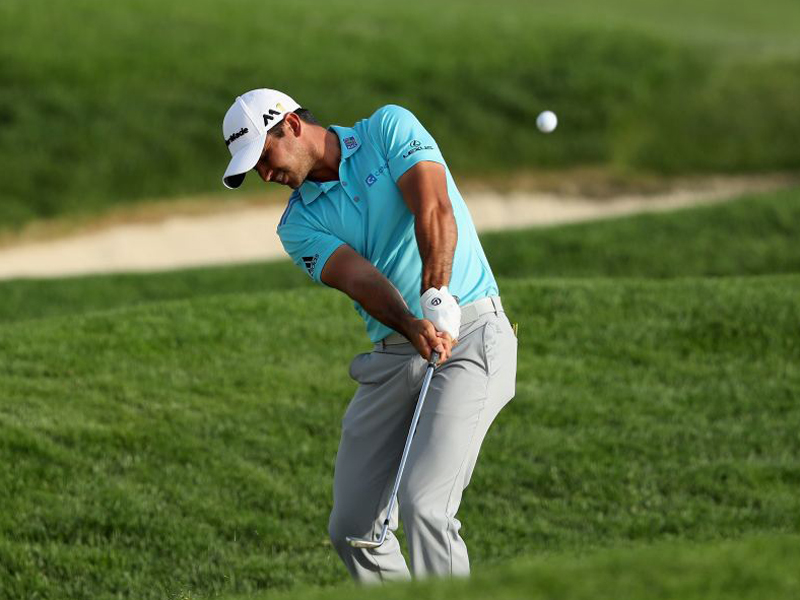 UPDATE: World number one Jason Day has made a huge move in the third and fourth rounds of the US Open at Oakmont Country Club.

Sitting tied for 45th through two rounds and nine shots off the lead, Day produced an impressive 4-under 66 to rocket up to a tie for eighth at 1-over par.

• Chris Gayle tells Mel: ‘You’re the one who looked bad’
• Why a women’s AFL competition is a win for equality
• Jason Day: I planned to quit after reaching world No.1

Day is now just three shots off the lead with three holes to play.

Ireland’s Shane Lowry has forged his way into a two shot lead through 14 holes of his third round as he chases a maiden major.

Lowry is 5-under for the championship, two clear of upstart American Andrew Landry, who is three under through 13 holes to hold second alone.

A trio of big names who have come so close but not yet claimed a major in Lee Westwood (15 holes), Sergio Garcia (14 holes) and Dustin Johnson (13 holes) are tied third at two under par.

In fact, every player currently ahead of Day has not tasted major success, setting up a nervy finish.

Day is seeking to become the first player to win a major with an opening round 76 or higher since Jack Fleck won the 1955 US Open.

Starting on the 10th hole in round three, he let his intentions known making a huge curling, lightning fast 20-footer for an opening birdie.

A tap-in birdie on 12 was followed by another close range approach on 13 and then another lengthy putt dropped in on the 14th to have the Queenslander flying out of the blocks and looking at a potential record score.

A bogey on the third, his 12th, stalled him for a brief moment until he nailed an eagle a hole later, getting back square with the card for the first time since starting the tournament.

Adam Scott is just a shot further back at 2-over with one hole still to play in his third round.

He is the last legitimate Australian hope though as Cameron Smith (16 holes) sits five over and Marc Leishman (17 holes) dropped from even par to seven over.