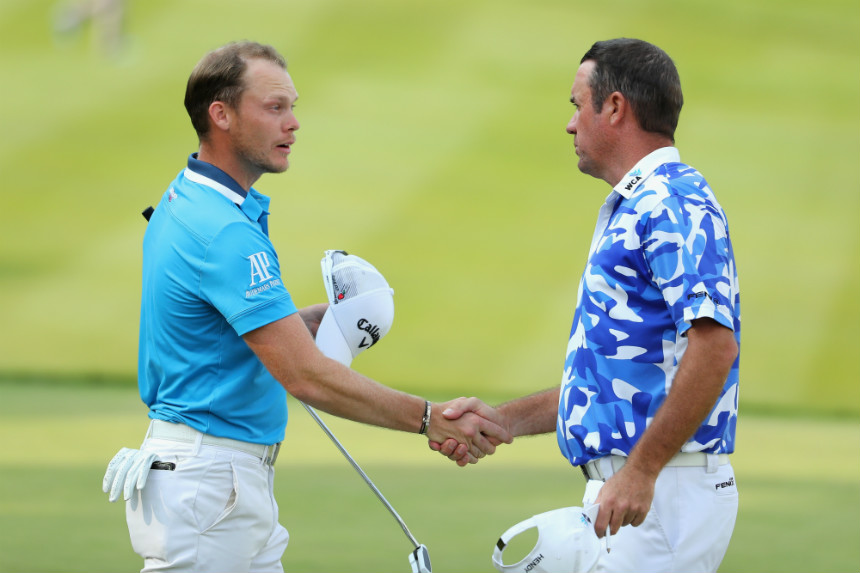 Australian golfer Scott Hend’s choice not to act on impulse at the BMW PGA Championship might just be one of the smartest decisions he has ever made.

The 43-year-old from Townsville was constantly abused by fans through the latter stages of his third round on Saturday and later admitted he was “ready to punch” them.

But Hend avoided a major international incident and a swag of bad headlines by letting his golf do the talking at Wentworth.

Playing with US Masters winner Danny Willett, Hend was never going to get the same support that the home favourite did.

But he took exception to sustained abuse, saying during a post-match press conference: “Danny was getting all the crowd support and I had no problem with that.

“But there were a couple of guys out there who were really over the top.

“It wasn’t very nice what they were saying … it was quite rude and personal.

“If it was up to me, I would have had them thrown out.

“It’s not Danny’s fault but we are all out here playing golf. And it’s not fair being drunk and being smart arses, as these two guys were.

“Danny and I are mates. I’ve played with him before and he wants me to do well and I want him to do well.

“But when you get hecklers in the crowd saying pretty rude things as they were … I was ready to punch them.”

‘He was just waiting for it all to kick off’

Because Hend was in the final group of the day with Willett, he was unable to avoid the late attention that he said really ramped up on the 14th hole.

Hend also hit out at the lack of staff or marshals who were present on the course to control the unruly spectators.

And he revealed that Willett feared the worst when the Aussie said he was going to confront the fans.

“I didn’t see any marshals around,” he added.

“But when I mentioned to Danny I was going over to speak to them [the hecklers], he was just waiting for it all to kick off.

“Danny was just waiting for me to punch one of the guys in the mouth.

“He had been hurling abuse at me before I hit my first putt at 14 and just wouldn’t shut up from there on.”

Hend not only dropped shots at holes 13 and 14, but 15 too, giving his critics even more ammunition.

But he hit back well, recovering on the 17th to make par before a final-hole eagle saw him end the third round leading the tournament by one stroke.

When asked what it would mean if he was to win the event, Hend responded: “I’m not really thinking that far ahead right now.

“I’m just thinking about what I’m going to have [for dinner] tonight to be honest.

“I’ll just go about my work tomorrow and try and get the ball a bit more off the centre of the club, a bit more consistency in the swing and what will be, will be.”

Hend has won twice on the European Tour.

He was victorious at the True Thailand Classic earlier this year, while he also won the 2014 Hong Kong Open.