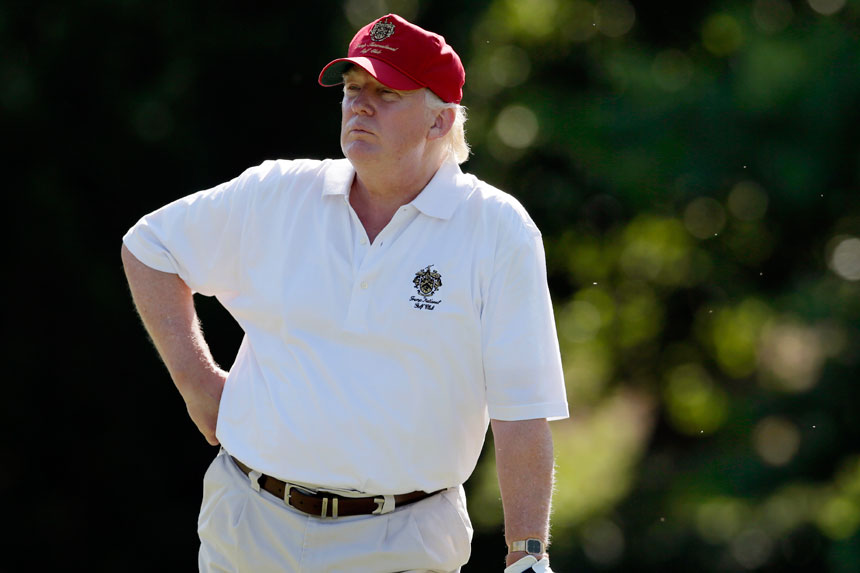 It seems that many Americans, Republicans at least, were willing to forgive Donald Trump for his continual gaffes and slip-ups.

But allegations he cheats at one of his favourite sports might strike a blow to the apparent Republican candidate for the US presidency.

• How to watch the EPL without joining Optus
• Why Leicester City’s success is no fairytale story
• ‘Would you care if you were worth over $10 million?’

It must be noted that De La Hoya, now a promoter, is trying to build interest in an upcoming fight between Amir Khan of England and Mexico’s Canelo Alvarez.

But his claims that he has ‘caught’ Trump cheating at golf have exploded in the United States in the context of his recent victories in the race for the Republican candidacy.

“I’m not (voting) for someone who cheats in golf,” De La Hoya initially said, reciting a 2014 round when Trump – at his golf club in Los Angeles – asked to join the ex-boxer and his friends.

He was then quizzed further: “Yes, I caught him. It was unbelievable. But I guess it was his course, so it was his rules.

“Donald, what he does is he tees off first so we go off to our balls and what do we see but Donald Trump right in the middle of the fairway.

“It shows something about his character.

“It goes to show what we’re dealing with.”

“Not only didn’t I cheat, I didn’t play with him,” he added.

“I have never played a round of golf with this guy.”

De La Hoya is far from the first person to accuse Trump of foul play on the golf course.

Actor Samuel L. Jackson hit the headlines in January when he was quizzed about his relationship with Trump – and the fact they were ‘golf buddies’ – in United Airlines magazine Rhapsody.

“I would never say buddies, or friends. I’ve golfed with him,” Jackson responded.

It got back to Trump and sparked a war-of-words.

Jackson, on Late Night with Seth Meyers, responded: “Yeah, I’ve met him a lot! I’ve played golf with him.

“I actually played golf with him with Anthony Anderson one day, and we were all playing golf together, and we clearly saw him hit a ball into a lake at Trump National in Jersey – and his caddy told him he’d found it (on the course).”

Anderson remembers the round and later said: “Trump is a great golfer.

“I’m not going to say Trump cheats. His caddy cheats for him.”

Rock star Alice Cooper also dobbed Trump in for cheating on the golf course in a 2012 interview.

Cooper told Q Magazine: “The worst celebrity golf cheat? I wish I could tell you that.

“It would be a shocker. I played with Donald Trump one time. That’s all I’m going to say.”

Trump also denied he had played golf with Cooper.

“That’s a terrible thing to say about people, especially me,” he said.

Trump, who owns 18 golf courses – including Trump Turnberry in Scotland – is allegedly ‘self-taught’ and once shot a 66 at Trump International Golf Club in West Palm Beach, Florida.