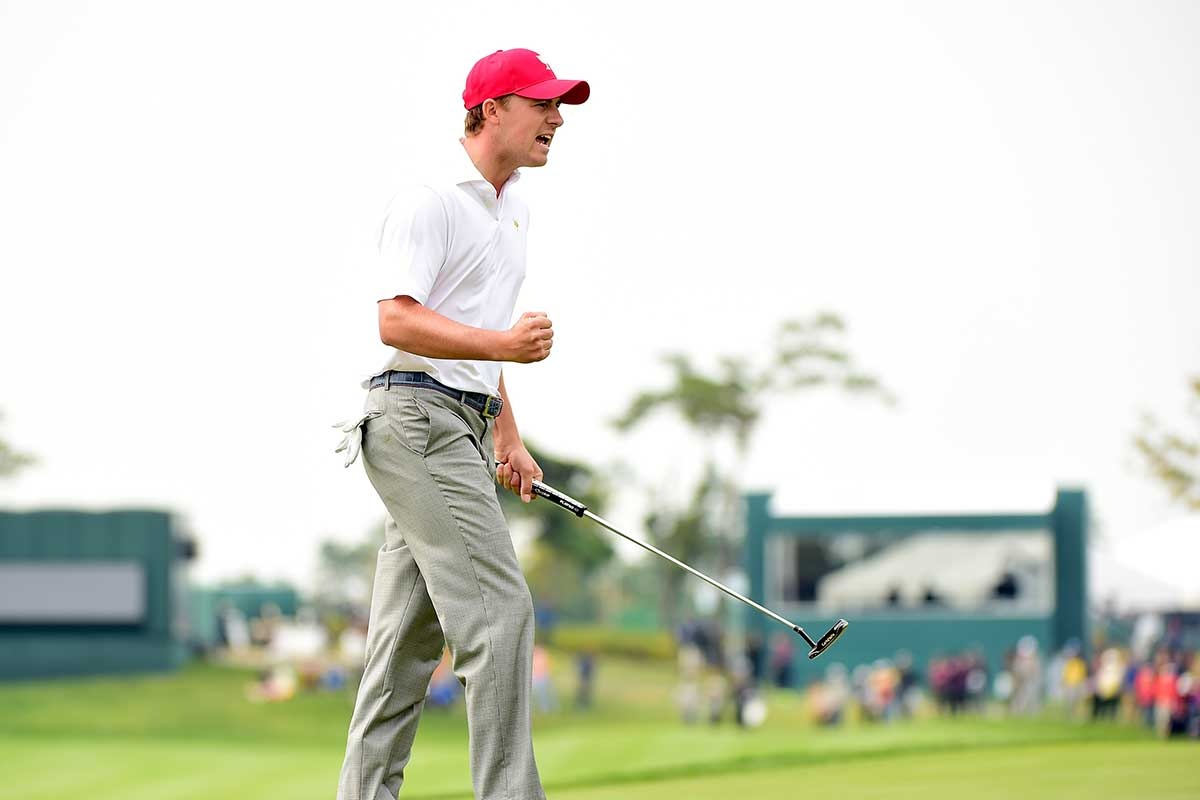 The Presidents Cup remains on a knife-edge, the Americans leading the International team 9.5 to 8.5 ahead of Sunday’s deciding 12 singles match-ups.

South African Branden Grace delivered two big shots in darkness on Saturday to keep the Internationals within one point – the smallest margin going into the final day in 10 years.

That’s what the International team wanted – and needed – after just one victory in 1998 in Australia.

• Where is Australia’s best golf getaway?
• How to not get ripped off buying golf gear online

“We need to win,” Louis Oosthuizen said. “This is huge for us.”

The South African duo are the first International tandem to go 4-0 in team matches. Tiger Woods and Steve Stricker did it in 2009 for the US.

As Saturday’s foursomes and fourballs were both shared 2-2, South Korea’s Bae Sang-Moon and Japan’s Hideki Matsuyama wrote themselves into Cup folklore with a thumping fourball victory.

They belted Americans Jimmy Walker and Chris Kirk 6 and 5 in the most-accomplished display of better-ball golf of the week, during which they birdied an astonishing nine of the first 11 holes.

Only twice before has a match ended after fewer holes in Presidents Cup history, David Frost beating American Kenny Perry 7 and 6 in 1996, and Korean KJ Choi with Australian Adam Scott, 7 and 6 victory over Tiger Woods and Steve Stricker in 2011.

Massive galleries cheered their Korean golfing hero on a damp, cold and windy day. Bae fired three straight birdies from the seventh to go 4-up.

Matsuyama sank two more on 10 and 11 as they stormed to 6-up with seven to play.

“It was a joy to play with him and everyone was cheering us on,” added Matsuyama.

“One advantage that we had is I don’t speak a lot of English, but Sang-Moon does speak Japanese, and that really helped our chemistry.”

When they halved the next hole to lie 6-up with six to play, Walker mistakenly thought the Americans had lost, but the Asian pair closed it out on the next green to square the overall match score.

“I’m really glad to be here, because a lot of Korean people are coming out and supporting the International team – it really means a lot,” said Bae.

“It’s a lot of nerves but I have to play good. I’m really looking forward to playing singles tomorrow.”

Earlier on Saturday, world No.1 Jordan Spieth holed two crucial putts on the final two holes to maintain the US team’s slender one-point lead after the morning foursomes.

Spieth, with Dustin Johnson, was up against the man he battled for supremacy in majors all season, Australian Jason Day, who was teamed with Charl Schwartzel.

Again, the Texan won, as he had in the US Masters and Open this year, while Day beat Spieth for the PGA Championship.

Spieth and Johnson were down from the fourth hole, three down at the turn and one down with two to play.

But nerveless Spieth rolled in a seven-footer for a birdie to square the match and repeated the feat for a winning par at 18.

He revealed later he was anything but calm.

“Your blood is running – it’s running through your hands. You know it’s there.

“Just looking at the spot just in front of the ball allows me to get over the tension in my hand and make a nice, solid stroke over that point.

“That was a great fight. And it was a huge point in the Presidents Cup.”