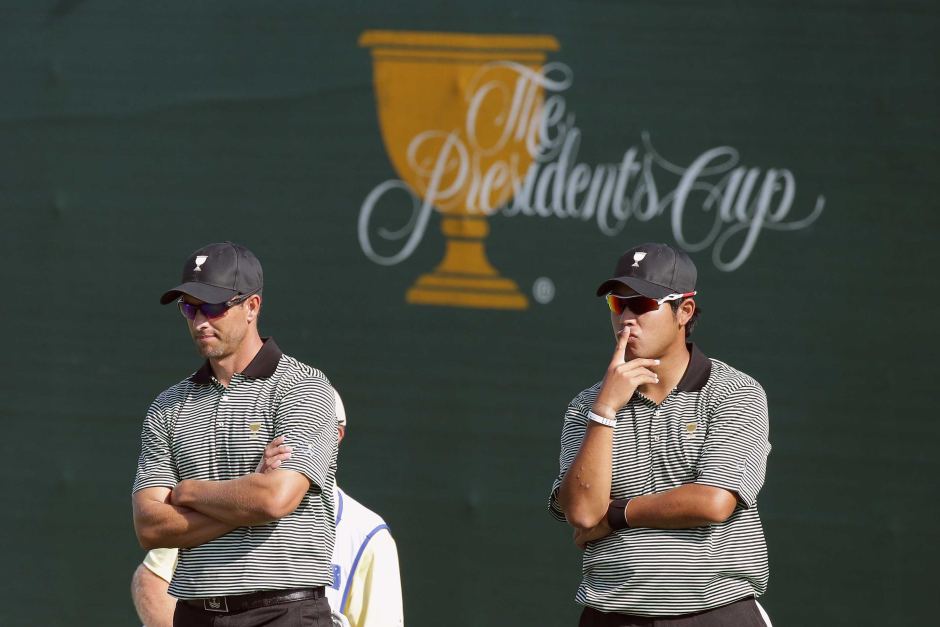 The US team got off to a flying start on Thursday in the Presidents Cup to lead the International team 4-1 after the first five foursome matches.

Third pairing out Rickie Fowler and Jimmy Walker got the first point on the board for the US with a dominant 5 and 4 victory over rookie duo Thongchai Jaidee of Thailand and Anirban Lahiri of India.

By then the scoreboard was bathed in US red with only the South African pair of Louis Oosthuizen and Branden Grace offering resistance with a solid 3 and 2 win over the out-of-sorts Matt Kuchar and Patrick Reed.

“We knew the US always start really strong,” said Oosthuizen, a key member of an International side trying to win the trophy at the Jack Nicklaus Golf Club in Incheon, South Korea, for only the second time in 11 attempts.

“I said to Branden we’re the second match out let’s get some blue numbers in there and try to maybe pull the other guys along.”

“We played nicely but overall the US have been a bit stronger today.”

Australia’s Adam Scott had the honour of the first tee shot of the 11th Presidents Cup but set the tone for a day of scrappy play from the International side by finding the right rough.

With former US president and honorary 2015 Presidents Cup chairman George W. Bush leading applause on the opening tee, Bubba Watson struck the first blow for the US with a booming right-to-left drive that landed in the heart of the fairway.

Hideki Matsuyama rescued the situation for Scott with a solid approach as the hole was halved in par.

But then the Americans caught fire slamming in birdies at the next four holes to race to three up after just five.

Scott, in his seventh Presidents Cup, stayed patient and pulled a hole back at the seventh before playing a majestic wedge at the 10th to leave Matsuyama four feet away to cut the deficit to one.

The turning point came on the next hole when Scott, reverting to the short putter this week instead of the broomstick he has used for years, faced an eight-footer to square the match but pulled it horribly left under pressure.

By contrast Watson’s partner J.B. Holmes was impeccable with the putter all day and sank birdies at the 15th and 16th to close out a 3 and 2 win.

Holmes, only called into the side last Friday to replace the injured Jim Furyk, gelled wonderfully with the big-hitting double Masters champion.

Player of the year Jordan Spieth and partner Dustin Johnson had an uncharacteristic sloppy front nine against the similarly wayward pair of Australia’s Marc Leishman and New Zealander Danny Lee.

But the American duo showed their class after going to the ninth just one up and eventually ran away with the match 4 and 3.

Only one match went to the final hole as Phil Mickelson and Zach Johnson led most of the way against Aussie pair Jason Day and Steven Bowditch.

Mickelson had an early contender for shot of the week when holing a 45-foot bunker blast at the short 13th to put his side 2 up.

But US PGA champion Day would not lie down and holed a monster birdie putt at the 17th to ensure the match went the distance.

Day then boomed a drive down the 542-yard par-five 18th to leave Bowditch 230 yards to the pin but an adrenalin-fuelled Mickelson pulled out his own big guns and flew his tee shot past the Australian’s by almost 60 yards.

Johnson had just 186 yards to the flag and obliged with a measured six-iron to eight feet.

When Day lagged his 20-foot eagle effort just left of the pin out came the handshakes and the Americans had secured their fourth point of a dominant opening day.

US off to flying start in Presidents Cup