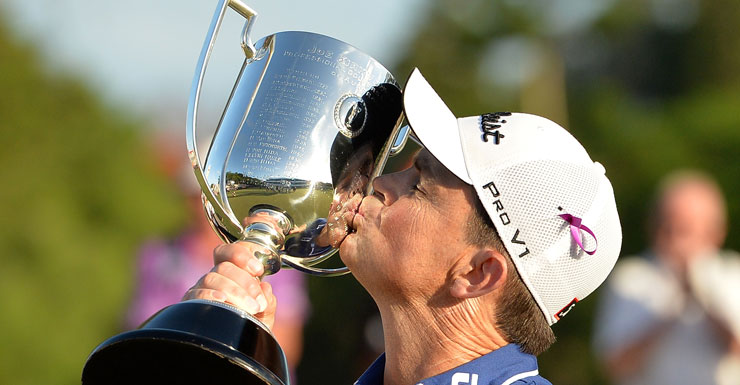 Lost in the drama and near-darkness of his Australian PGA Championship playoff win over Adam Scott was Greg Chalmers’ entry to one of the most exclusive clubs in Australian golf.

While Scott was left to rue a recalcitrant putter at Royal Pines, Chalmers joined esteemed company including Greg Norman, Norman Von Nida and Carnegie Clark as one of only eight men in more than a century to win both the Australian Open and PGA titles on multiple occasions.

In addition to having his name etched onto the Joe Kirkwood Cup for a second time after first hoisting the trophy in 2011, Chalmers has also won the Australian Open in 1998 and 2011.

Norman, Von Nida, Clark, Peter Senior, Robert Allenby, Peter Lonard and Ossie Pickworth are the only other men to have completed the impressive double double.

It is a rare feat that not even Scott and other greats including major champions Peter Thomson, Ian Baker-Finch and Wayne Grady have managed to pull off.

“He’s a bit of a freak because his short game is unquestionably one of the strongest in the game.

“His bunker play, his pitching and his putting are outstanding.

Despite his successes in Australia, Chalmers craves a maiden win on the US PGA Tour and Newton believes the plucky West Australian is capable.

“It’s probably irking him that he hasn’t won in America,” Newton said.

“But it’s not the same game as playing The Australian in a bloody 30kph southerly.

“Apart from the majors and one or two other courses, it’s a putting competition.

“It’s not out of his reach at all. I definitely think he can win in America.”