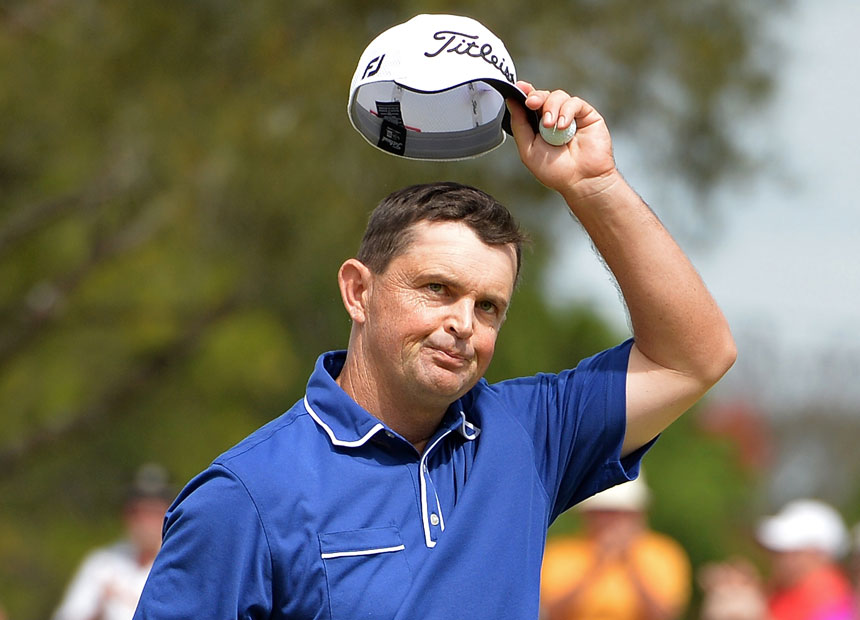 Scott had four opportunities to win the Joe Kirkwood Cup with birdie putts during the playoff but failed to make any.

When he then missed a four-foot putt for par on the seventh playoff hole, it allowed Chalmers to seal the win with a near tap-in.

• Jordan Spieth: he came, he saw, he conquered
• How one trap shot saved the Masters from mediocrity

“I was all over the place … really excited and thrilled.”

The playoff, the longest in history for a tier one tournament in Australia, started as a three-way playoff after Scott, Chalmers and South Australia’s Wade Ormsby finished level on 11-under at the end of Sunday’s fourth round.

Ormsby forced his way into the playoff with a long putt on the 18th hole to complete a one-under 71 fourth round.

The 34-year-old from South Australia had the chance to putt for the title on the second playoff hole but missed his 1.5 metre attempt to the left.

On the third playoff hole, Ormsby’s brave bid for a second professional win faded as he went wide on his approach and his rivals both made birdie.

“It was nice to get into the playoff there,” Ormsby said.

“I didn’t think I was going to get in and I got myself in it but, yeah, a little bit disappointed.”

Chalmers’ putting in the end proved the difference after he’d nailed eight birdies during his fourth round to post a tournament low eight-under-par 64 to surge to the top of the leaderboard.

Scott, meanwhile, probably should have won the event comfortably but regularly failed to sink birdie putts and was made to pay for his profligacy.