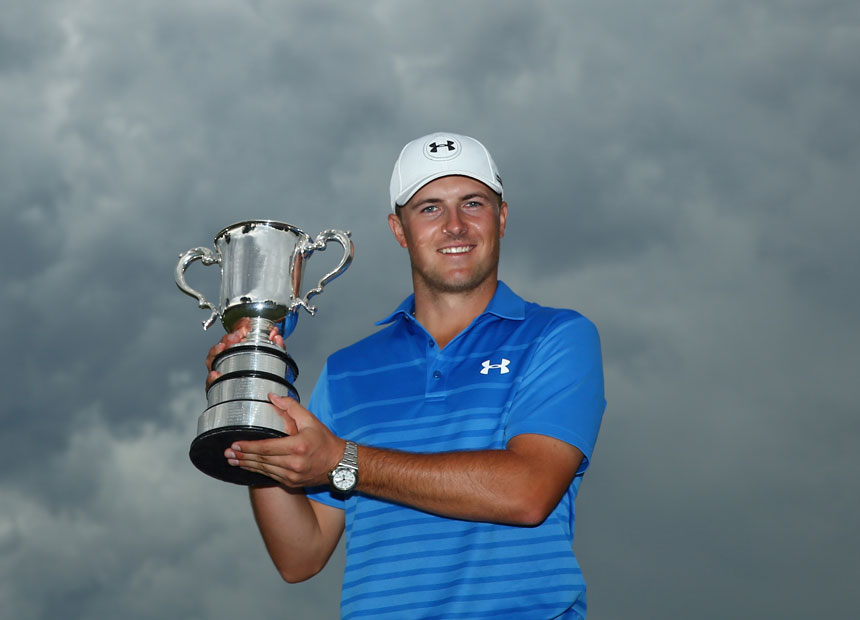 The 21-year-old prodigy fired a spectacular course-record eight-under-par 63 in Sunday’s final round to finish with a 13-under total of 271 for the championship as his rivals struggled in continuing tough conditions at The Australian Golf Club in Sydney.

• How one trap shot saved the Masters from mediocrity
• Look out Golden Bear, Tiger’s got a new coach

A third-round co-leader with Spieth and two-time champion Greg Chalmers, Brett Rumford (70) shot 71 to be third at six-under.

Chalmers (71) was fourth at five-under, while world No.3 Scott (71) was outright fifth, a further shot back, and will rue not challenging Spieth after briefly snaring a share of the lead with a birdie on his opening hole on Sunday.

Jake Higginbottom (69) was sixth at four-under, while two-time winner Robert Allenby and New Zealand’s Ryan Fox closed with 70s to be the only other players in red figures at one-under in a tie for seventh.

McIlroy finished equal 15th at two-over in his title defence after a final-round 72.

Spieth, the world No.14 who burst to international prominence with a runner-up showing behind Bubba Watson at this year’s Masters, set up the win with a front-nine birdie blitz.

He picked up shots on the third, fifth, sixth and seventh holes to open up a three-stroke lead by the turn.

Unlike last year when McIlroy and Scott staged a battle royale at Royal Sydney, Spieth turned the back nine on Sunday into a one-man show as he continued to roll in putts from everywhere.

He took a stranglehold on the Stonehaven Cup with further birdies on the 14th and 15th holes to jump five clear of the field.

Not done yet, Spieth iced his round with more birdies on his final two holes in one of the great performances in Australian Open history.

“It’s definitely the best round I’ve ever played and the best win I’ve ever had,” Spieth said.

“I’m for sure going to be coming back to Australia.”

He is the first American to win the Open since Brad Faxon at The Metropolitan in 1993 – when Spieth was just four months old.

As well as earning a cheque for $225,000, Spieth will join some of golf’s all-time greats including Jack Nicklaus, Gary Player, Arnold Palmer and Greg Norman to have his name etched on the Stonehaven Cup.

He is also the youngest champion since Aaron Baddeley won back-to-back titles as a teenager in 1999 and 2000.

After a horror front-nine five-over-par 40 in the first round on Thursday, Scott had all the momentum early on Sunday after clawing his way into the lead for the first time all tournament.

But after taking a bogey on the tough par-3 fourth, when he was unable to save par from the greenside trap, Scott’s championship hopes slipped away after he made a meal of the par-5 fifth.

He had to take a penalty drop for an unplayable lie after blocking his tee shot into jungle and then hooked backed into trees on the left.

He punched out through a narrow opening but was unable to get up and down, the nasty double-bogey leaving Scott five behind Spieth and playing catch-up.

While unable to keep pace with Spieth, the consolation prizes for Pampling, Rumford and Chalmers were entry to next year’s British Open at St Andrews.