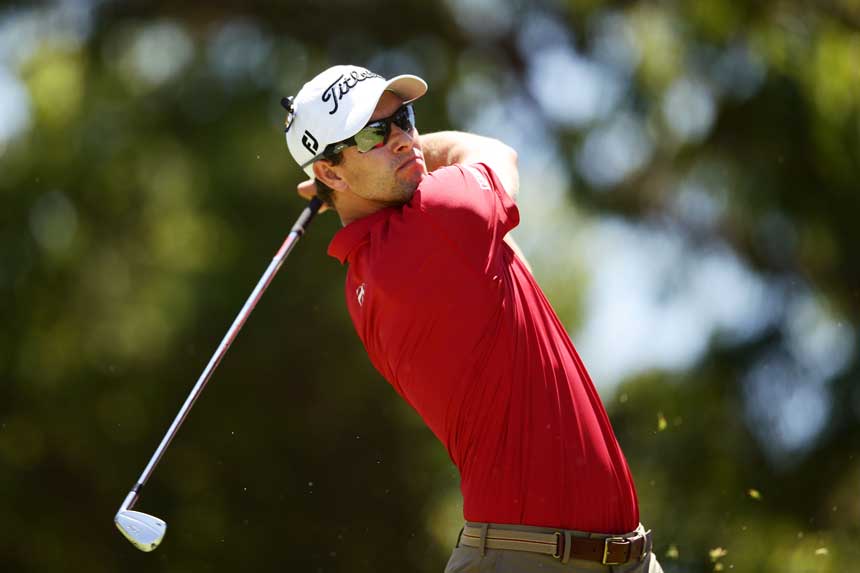 Adam Scott has emerged from a dramatic third round of the Australian Open just one shot off the championship lead.

Halfway leader Greg Chalmers ground out an even-par 71 in testing conditions to remain on top, with Brett Rumford and American ace Jordan Spieth carding 69s to join the two-time champion at five under for the championship.

Scott and veteran Rod Pampling shot 69s to be tied for fourth at four under – but world No.1 Rory McIlroy imploded mid-round to leave his title defence in tatters.

• Look out Golden Bear, Tiger’s got a new coach

The defending champion had a triple-bogey and double-bogey mid-round to plummet from the joint lead into a tie for 14th at one over after a uncustomary round of 76.

Only eight players ended the round in red figures as blustery winds and baking greens turned so-called moving day into grinding day at The Australian Golf Club.

Long-hitting amateur Todd Sinnott (73) is outright sixth at two under, one ahead of rising star Jake Higginbottom (72) and Sydney touring professional Aron Price (69).

After only making the half cut right on the number, Queenslander Daniel Nisbet fired the round of the day in the easier morning conditions – a bogey-free four-under 67 – to surge up the leaderboard into equal ninth spot at even with the card.

Scott, though, will carry most momentum into the final round after clawing his way back into contention after a nightmare start to the tournament.

The 2013 Masters champion was five over par after his opening nine holes on Thursday.

Chalmers rebounded from a bogey-bogey start with birdies on the sixth and 14th holes to retain a share of the lead heading into the final round.

Spieth, the world No.14 and 2014 Masters runner-up to Bubba Watson, showed his class to birdie the last to join Chalmers and Rumford on top.

Rumford mixed four birdies with two bogeys to give himself a shot at winning a maiden national championship, while 45-year-old Pampling ignited his round with a spectacular eagle two on the 401-metre par-4 10th.

Holing out from 120 metres, Pampling rode the momentum all the way through the back nine and into a share of the lead.

McIlroy’s title hopes suffered a hammer blow with a diabolical triple-bogey seven on the par-4 ninth.

After blocking his tee shot into waist-high rough, his gamble to try to muscle it out backfired spectacularly.

The world No.1 looked like a weekend hacker as he chopped the ball less than a metre, submerging it under flaky matting and being forced to take a penalty for an unplayable lie.

Even with the benefit of two club lengths’ relief, McIlroy still wasn’t out of the rough and could only manage to punch the ball about 100 metres before finally finding the green with his fifth shot.

But he was unable to hole his putt from less than three metres and suddenly dropped seemingly out of contention.

Scott one off the pace, McIlroy implodes