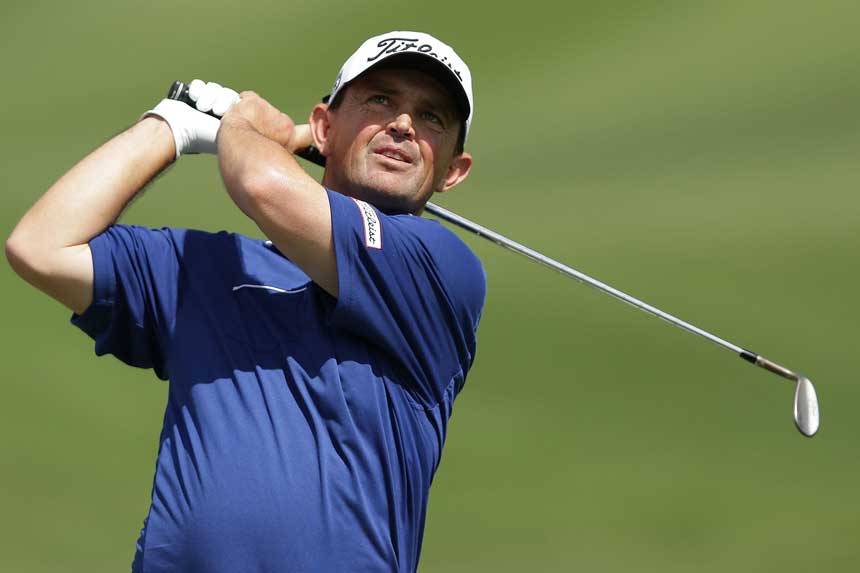 Globetrotting Greg Chalmers stands in the way of another dream final-round Australian Open duel between Rory McIlroy and Adam Scott.

McIlroy is one stroke behind on a jam-packed leaderboard after carding a rollercoaster 69, the world No.1 mixing an eagle with six birdies and six bogeys.

Scott rebounded from his first-day shocker to match Chalmers’ 67 in a flawless display highlighted by an eagle three at the par-5 14th that ignited his fightback.

After being five over for the tournament after his opening nine holes, Scott is now two under and poised for another serious challenge in his quest to atone for last year’s final-hole slip-up that allowed McIlroy to snatch the trophy at Royal Sydney.

“We had a good morning for it so I had to take advantage just for the sake of getting myself back into the tournament,” Scott said.

“Yesterday, I got off to a bad start and, in the wind, it was tricky and I didn’t scramble when I had to early in the round and it was slipping away from me.

“Today, it didn’t start much better – I was scrambling – but I scrambled well and then, all of sudden, I made eagle at 14 and momentum is on your side.”

All up, 16 players are within five shots of the lead, including another two-time champion in Robert Allenby at two under with Scott after a 69.

But the player everyone is chasing is Chalmers.

Champion in 1998 and 2011, the 41-year-old missed the cut at last week’s Masters in Melbourne and flew under the radar heading to The Australian.

But the plucky West Australian put his flop down to a poor preparation after only arriving in Australia the day before the Masters after playing successive tournaments in the US, Perth, Malaysia and Mexico.

“I’m not jet-lagged. It’s just my sixth event in a row. I’m just trying to conserve my energy,” he said.

“And ironically the more birdies I have it seems the more energy I have.”

Despite his lofty position, Chalmers insisted it was much too soon to start dreaming of joining golfing legends Jack Nicklaus, Gary Player, Peter Thomson, Greg Norman and Norman Von Nida in having his name etched on the Stonehaven Cup at least three times.

“It’s very early to be talking about that given who’s right behind me and who’s playing well,” Chalmers said.

“So, if we get to have that conversation, great. On Friday night, it doesn’t seem to matter that much.”

Jamie Lovemark went one better than Scott and Chalmers to snatch the course record at the revamped layout with a 65 that left the little-known American at even par for the tournament and well in the hunt heading into the weekend.