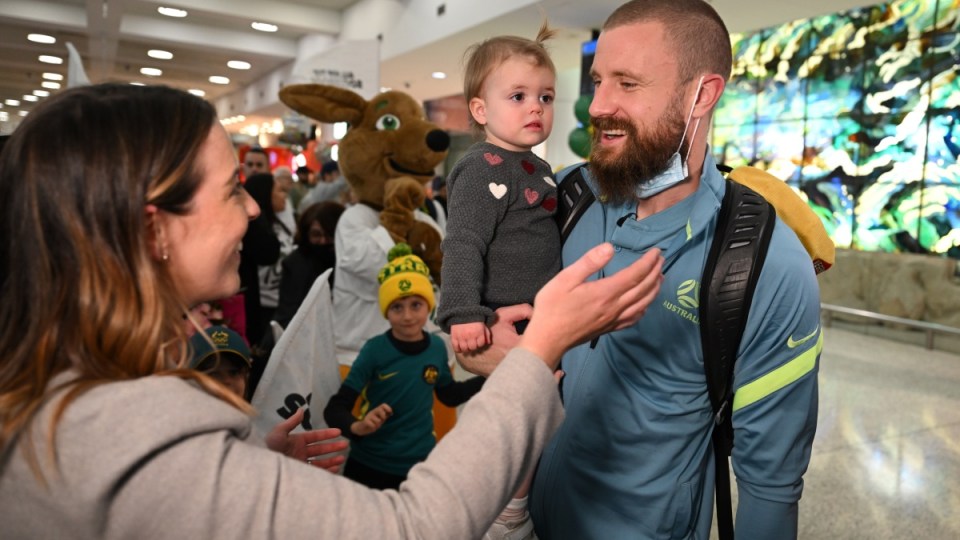 Hero goalkeeper Andrew Redmayne says the Socceroos are “miles away” from considering whether they’ll use their goalie swap tactic at the FIFA World Cup later this year.

Bearded and beaming, Redmayne was among Socceroos players given a warm welcome home by fans and family at Sydney airport on Wednesday evening following the heart-stopping World Cup playoff triumph over Peru in Qatar.

Coach Graham Arnold made the brave decision to substitute captain Mathew Ryan for Redmayne before the game went into a penalty shootout.

The gamble paid off in a big way; the injection of the boisterous Redmayne appeared to rock Peru’s confidence.

By saving the Peruvians’ sixth penalty attempt, Redmayne catapulted the Socceroos to a fifth-straight World Cup and himself into the history books.

But Redmayne said he was unsure whether he’d get a chance to reprise his role as the Socceroos’ 11th hour hero at the World Cup in November.

“We’re miles away from talking about that,” he told reporters at Sydney airport, after an emotional reunion with wife Caitlin and young daughter Poppy.

“We’re still relishing the win. It’s been a long, arduous campaign and we’re just glad to see the end of it with success.”

It was only Andrew Redmayne’s third senior appearance at age 33 when he came on with a trip to the World Cup on the line in the 120th minute.

While Ryan said Arnold had previously discussed the possibility of switching goalkeepers if a qualifier went to penalties, the skipper admitted he was surprised when the plan was put into action.

“I had no idea,” Ryan said, “I was preparing myself as if I was going to go into the penalty shootout.

“Full credit to ‘Redders’, he went out there and he produced when we needed to.

“A lot of people probably wrote us off and didn’t give us a chance to go through but hopefully (the win) can inspire the younger generation out there to go and chase their dreams.”

Now that he’s back home, Redmayne said he was focused less on basking in newfound celebrity status and more on spending time with his young family.

“I’ve spent a bit of time on the road this year, with the (AFC) Champion’s League and (World Cup) Qualifiers and A-League.

“So it’s really nice to know that it’s done and dusted for a few weeks and we can put our feet up together.”

His teammates who play club football in the northern hemisphere, including Ajdin Hrustic, Jackson Irvine and Bailey Wright, won’t have as much of a break before they join their sides for pre-season.

With the qualifiers over, the Socceroos will soon turn their attention to the World Cup itself, where they are drawn in the same group as Tunisia, Denmark and reigning champion France.

Football Federation Australia has already confirmed Australia will face New Zealand for two friendlies in September that are set to serve as World Cup preparation.

FFA CEO James Johnson said the win over Peru proved once and for all Australia belonged on the world stage.

“Five consecutive qualifications for the World Cup, the Women’s World Cup just around the corner … I think we can say with a high degree of confidence that this is a football nation,” he said.