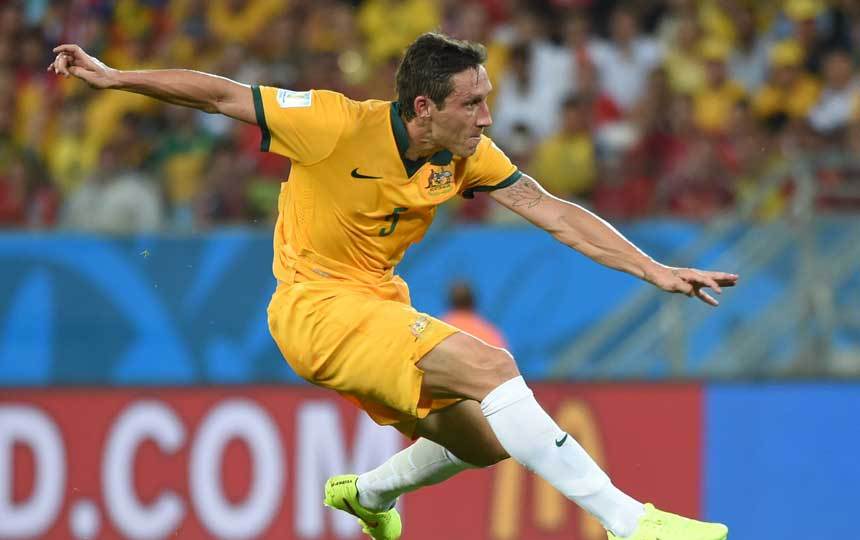 Mark Milligan sends one into the net during his glory days as Socceroos skipper. Photo: Getty Photo: Getty

Australian soccer has come of age on the world stage, according to former Socceroos skipper Mark Milligan, who notes a win in the looming make-or-break match with United Arab Emirates will place Australia just one win shy of making the World Cup finalists.

If Australia records those two vital victories it will confirm the national team’s fifth-straight berth in World Cup finals and demonstrate the Socceroos can hold their own in any global competition.

Australia play a must-win play-off clash with the United Arab Emirates in Qatar on Tuesday (0400 Wed AEST), needing a win to stay in the race for a place in this year’s World Cup.

A victory against the Emiratis would put Australia into a do-or-die fixture against South American nation Peru the following week, with the winner of that tie booking a spot in November’s finals.

Milligan, a part of Australia’s squad at the past four World Cups, says while many are pessimistic about the chances of Graham Arnold’s team after a run of just one win from their past six qualifying matches, there can be no doubt within the camp about their prospects.

“I hope people understand the magnitude of not qualifying for a World Cup,” Milligan, now an expert for broadcaster Network 10, told AAP.

“It’s so, so important. I keep hearing talk around the place that if we don’t make it, we’re probably in a good place, we’ll survive.

‘We have to make it’

“We need to be of the attitude that we have to make it and I know that’s where the players will be.

“I know they’ll feel the energy off everyone else and they need that extra positivity to help them get across the line.”

Boosting Australia’s belief was a comeback victory over Jordan in a friendly on Wednesday (Thursday AEST).

The 2-1 win was the first time in eight games during Arnold’s tenure Australia have gone behind in a match but found a way to claim victory.

In the past seven occasions since Arnold took over in 2018, Australia have lost six games where they’ve fallen behind and drawn the other.

Milligan believes that is a crucial step for the team ahead of the play-offs.

“In a one-off game if you go behind it can’t be done and dusted,” he said.

“You need to make sure that you’re there come 90 minutes and in the race because there is no second chance.”

Arnold has also talked up the importance of having over a week to prepare for the game with the squad, as opposed to previous camps where his teams have been assembling from across the globe within days of kick-off.

From his own experience, Milligan says that will be a huge bonus for Australia.

“It’s been a little bit of a bumpy road over the last few months but this has been a good period,” he said.

“This time of year is probably the best time of the year for international football, in terms of you have the players together for an extended period of time. You’re not getting the players in 24 to 48 hours before the game.

“You actually have that few extra days to work on the things that you want to do.

“You just have to have every faith in the boys that are over there.

“I know, having previously been in that situation, how much it means and how important it is to make sure that you firstly put on a good performance and secondly you get the result.”

‘It means so much’: Celebrities share their abortion stories after Roe v Wade
Ajdin Hrustic looms as key for Socceroos after Tom Rogic withdrawal
Today's Stories