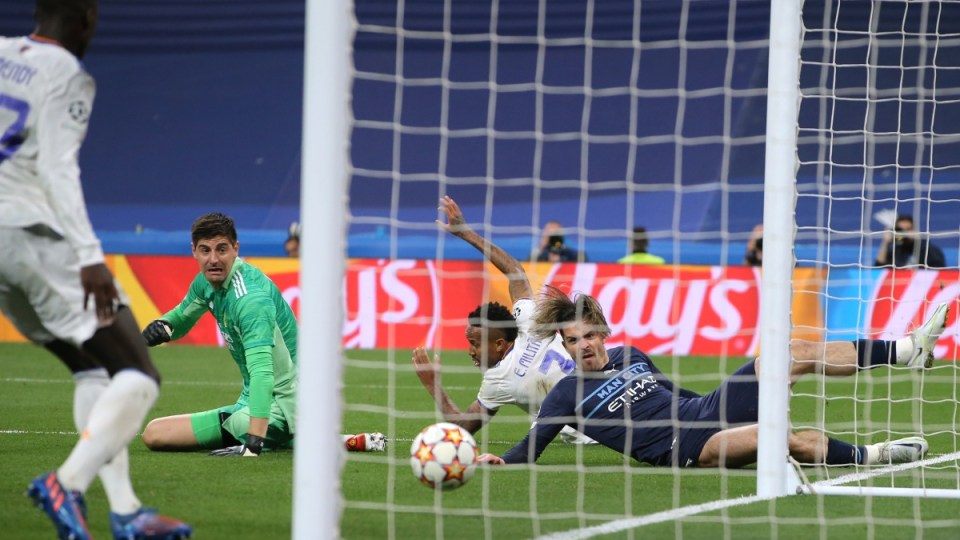 Manchester City's Jack Grealish (right) looks on as his shot on goal is cleared off the goal line by the Real Madrid defence. Photo: PA

Manchester City has to quickly put the disappointment of its Champions League failure behind it as it resumes the battle for Premier League supremacy with Liverpool at the weekend.

City was minutes away from booking a place in the final before Real Madrid produced a stunning extra-time comeback to advance to the May 28 decider against Liverpool in Paris.

With only a point separating leader City from Liverpool in the league and four matches remaining, Pep Guardiola’s side hosts Newcastle United on Sunday – a team it beat 4-0 away in December but which has shown much improvement recently.

Guardiola said his players felt the pressure in Madrid but must now regroup for the title run-in.

“Now we need to process that and come back, with our people at home and the last four games we have,” he said.

Liverpool hosts Tottenham Hotspur on Saturday and has the opportunity to retake the lead as it continues its bid for a historic quadruple of trophies.

Juergen Klopp’s team is unbeaten at home in the league this season, having won 14 of 17 games at Anfield, and will be full of confidence after winning at Villarreal in Tuesday’s Champions League semi-final second leg.

Tottenham last won at Liverpool in 2011 but Spurs manager Antonio Conte said his side would go to Anfield looking to take something from the match.

“For us, every game is vital.”

Tottenham is fifth and chasing a berth in next season’s Champions League but London rival Arsenal, which is two points ahead in fourth spot, has an opportunity to solidify its advantage by beating struggling Leeds United at home on Sunday.

Norwich City has been relegated and Watford has little chance of survival, leaving Burnley (34 points), Leeds (34) and Everton (32) fighting to avoid the third relegation slot.

Burnley has collected 10 points from four matches since the sacking of Sean Dyche, with interim manager Mike Jackson adopting a more attacking approach.