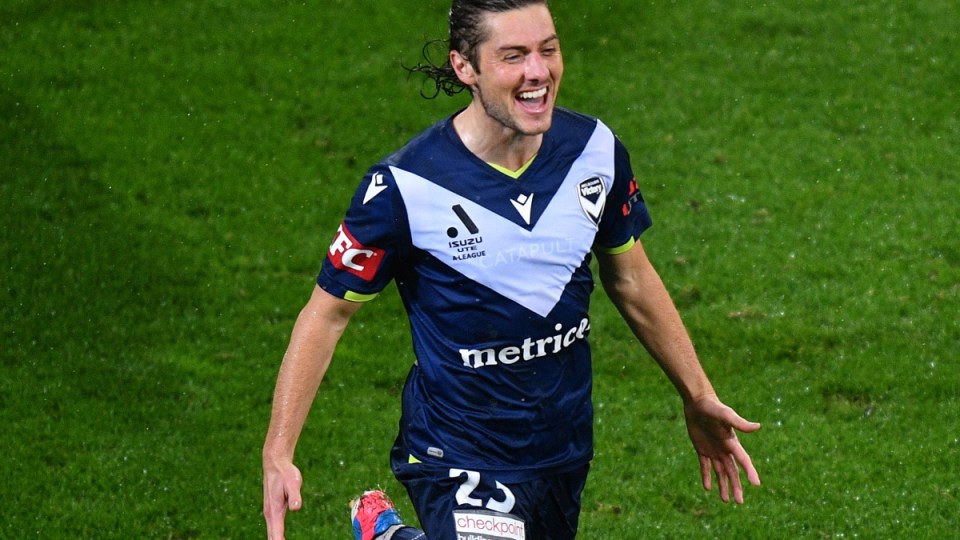 Marco Rojas scored one goal and set up another in Melbourne Victory's win at home to Wellington on Friday night. Photo: AAP

Victory leaped into second place, a point above Western United and one behind leader Melbourne City, which each have a game in hand, by claiming three points in teeming rain at AAMI Park.

But close to 12 minutes’ worth of VAR-related delays on decisions for two goals, including Victory having a would-be winner chalked off, only for it to be replaced with a penalty, dominated the game.

Victory snatched the lead in the second minute when Jake Brimmer found Marco Rojas, who burst down the right and squared it for Nick D’Agostino to score.

Chance to equalise from penalty spot

Despite Victory dominating, Wellington had a chance to equalise from the penalty spot in the 20th minute when Reno Piscopo’s shot hit the arm of Victory skipper Josh Brillante.

Referee Shaun Evans initially awarded a free kick but after a VAR review showed Brillante’s arm was inside the area, quickly changed his decision and gave a penalty.

But Piscopo’s penalty was poor and Ivan Kelava made a commanding save.

In the aftermath, Sam Sutton put a cross into the area and Leigh Broxham made a clearing header but caught Piscopo in the face with his elbow as he jumped.

After a five-minute delay, between Piscopo receiving treatment and consulting the VAR, Evans again pointed to the spot, to Victory’s dismay.

Victory appeared to have taken the lead in the 61st minute when Oli Sail parried Brimmer’s long-range effort into the path of D’Agostino to coolly tap home.

Instead, it led to a seven-minute VAR review.

Evans assessed whether Rai Marchan had fouled Ben Old in the lead-up, which would have chalked off the goal.

But as the delay continued, the VAR footage showed Evans had earlier missed Louis Fenton’s handball in the area from Jason Davidson’s cross.

As a result, the ball was brought back to the penalty spot, with Brimmer coolly converting.

After all the earlier drama, Victory wrapped up three points in the 78th minute when Davidson lifted a lovely ball to the back post where an unmarked Rojas headed home.

Victory has an away clash with Sydney FC left while fifth-placed Wellington can still seal a finals berth by beating Western Sydney or City.

Michael Pascoe: A grand housing alliance looms at last – if our new PM has the will
Sam Kerr voted WSL Footballer of the Year
Today's Stories