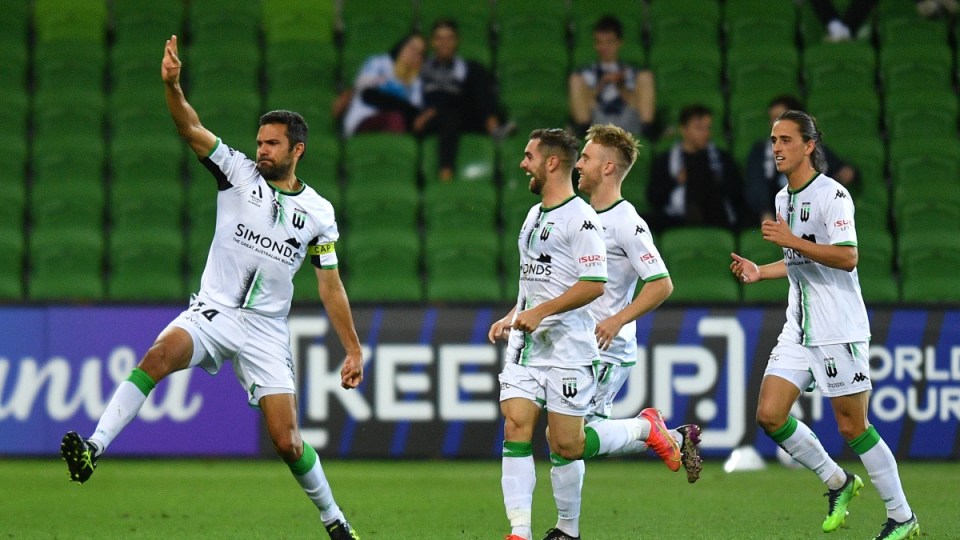 Nikolai Topor-Stanley, in his 358th game, looked set to spoil Broxham’s party when he headed home in the 47th minute, before former United defender Brendan Hamill equalised in the 85th.

The draw extends both teams’ winless runs to three games, with United second behind Melbourne City and Victory sitting sixth.

United will also sweat on Josh Risdon’s fitness after the luckless Socceroos defender landed awkwardly in the 11th minute and was substituted 11 minutes later.

“We’ve got a few experienced players out plus Josh Risdon going down quite early that we had to reshuffle the whole backline and our midfield,” coach John Aloisi said.

“Really proud of the group. They show time and time again when things are against them, especially after losing the last game, that they react well and their resilience is really good.

“Josh Risdon’s so strong that he doesn’t go down for no reason, so little bit worried. It’s unfortunate. Hopefully it’s nothing serious.”

After Victory’s Francesco Margiotta hit the bar on the stroke of halftime, United pounced.

Lachie Wales whipped a corner towards the near post where Connor Pain flicked on a header for Topor-Stanley to power home.

Jamie Young then pulled off exceptional saves to deny Jake Brimmer in the 53rd minute and Marco Rojas nine minutes later and Jason Geria in the 83rd.

Two minutes later Jason Davidson skidded a ball towards the near post where Hamill flicked home to snare a point.

‘Lot of belief in the group’

“We had to forget that (conceding after halftime) quickly and maybe it shows how far the team has come or the club,” Victory coach Tony Popovic said.

“That just shows you how far they’ve come. You can see there is a lot of belief in the group.

“Maybe last year that’s a game we as a club lose and maybe lose it well, lose it comfortably.”

In Wednesday’s other ALM game, Melbourne City defied the absence of several key players to extend its unbeaten run to eight matches with a 2-1 comeback win over Brisbane Roar.

Despite Henry Hore giving the Roar an early lead at Moreton Daily Stadium, an own goal from Kai Trewin and youngster Raphael Borges Rodrigues’ first ALM goal were enough to secure City the win.

The defending champion is now three points clear on the ladder.

City was also without captain Scott Jamieson (back) and defender Nuno Reis (COVID-19) as Kisnorbo made six changes to his starting XI from the weekend’s 1-1 derby draw with Melbourne Victory.