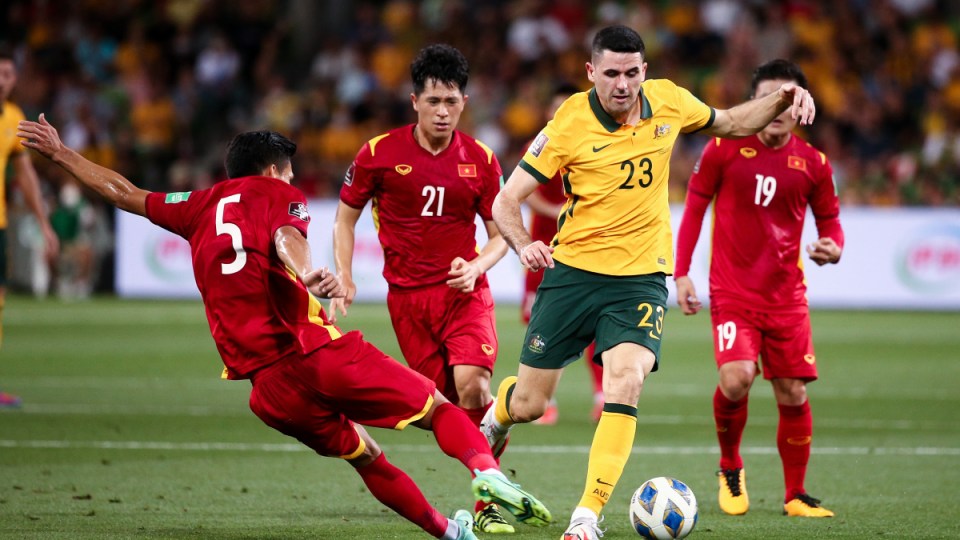 Tom Rogic scored one goal and set up another in Australia's World Cup qualifying win over Vietnam. Photo: Getty

A masterful performance from Tom Rogic has inspired the Socceroos to a 4-0 win over Vietnam in Melbourne, ensuring Australia stay in the race for an automatic World Cup qualifying spot.

Rogic has been in brilliant form at Celtic under Ange Postecoglou and after missing the November window through injury, scored one goal and teed up another for Melbourne local Jamie Maclaren.

Craig Goodwin and Riley McGree scored their first Socceroos goals off the bench in the second half to ensure Australia snapped a three-game winless run to remain in touch with leaders Saudi Arabia and Japan in Group B.

“We knew the significance of the game in terms of qualification,” Rogic said.

“It was a good performance from the team in general. We maybe got a little bit sloppy in the second half but, overall, I think it’s a good day’s work and I was just happy to be back playing in Australia,

“It’s probably been a couple of years since I’ve seen family and friends and there was a few in the crowd.

“We’ve got a bit of work to do in terms of qualification but we are on the right track now.”

Arnold had been due to finish his quarantine period on Thursday but didn’t clear the required protocols to to attend and a Football Australia spokesman said he would be assessed daily as to whether he could travel to Oman for the February 2 qualifier.

The change of voices on the sideline seemingly didn’t faze Rogic, who was involved in everything in an electrifying first half, and looked to have rifled Australia into the lead inside 20 seconds, sending the AAMI Park crowd of 27,740 into raptures.

From there, Australia’s creative moments were few and far between until the commanding Rogic helped deliver the breakthrough on the half-hour mark.

The playmaker lofted a cross towards Maclaren, who on his first start since June, slipped unmarked between two defenders to power home a bouncing header.

To the delight of the large and vocal Vietnamese contingent, the visitors burst out of the break, with Pham Tuan Hai lashing a shot just wide minutes after the restart.

Ryan made a reflex save to deny Nguyen Cong Phuong in the 62nd, then four minutes later, Nguyen Thanh Chung headed a close-range effort over the bar.

Ryan then turned provider, hoofing a long ball into the path of Goodwin, who, six minutes after entering the fray, coolly chipped Bui Tan Truong to settle Australia’s nerves.

Four minutes later, Goodwin teed up McGree for the young gun to cut onto his right and lash home, rounding out a successful first Socceroos game in Melbourne since December 2017.