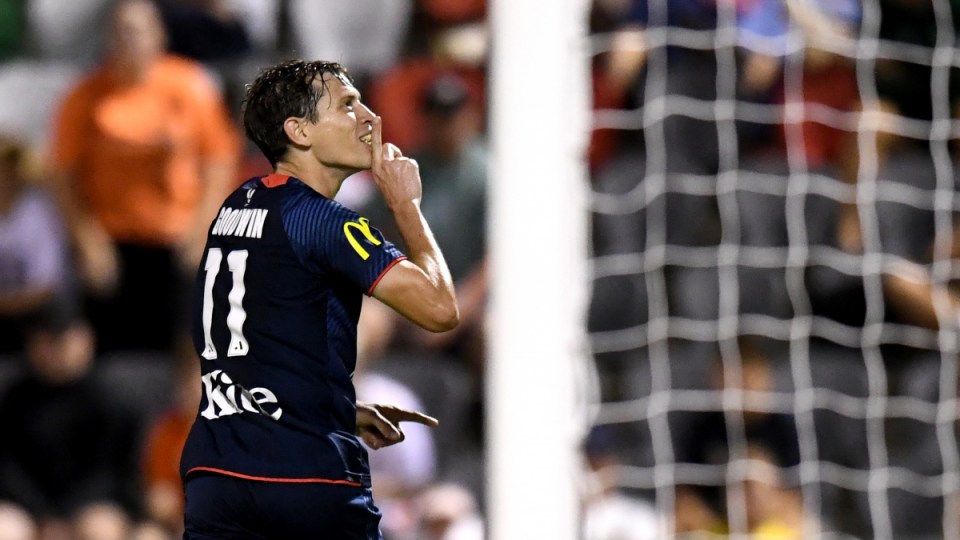 Socceroo Craig Goodwin has signed off with Adelaide United before joining Australia for crucial World Cup qualifiers with a double as the Reds claimed a 3-1 A-League Men victory over Brisbane Roar.

Goodwin scored in either half while Reds captain Stefan Mauk hit the back of the net from the penalty spot to cancel out former Red Nikola Mileusnic’s early opener for Roar and secure Carl Veart’s team just its second win of the season.

The 30-year-old scored a penalty in the first half before wrapping up just Adelaide’s second win of the season in the 85th minute with a classy finish against a tiring Roar defence.

Craig Goodwin doesn't miss and makes it 3⃣-1⃣ for @AdelaideUnited.

“He’s very strong. Has the best quality that we’ve got in our team in that front half of the field and that’s why he’s scores and he creates a lot of opportunities for us,” Veart said.

“We’re going to miss him and we wish him all the best.

“It’s a great honour to be playing for Australia and Australia need to pick up points as well … hopefully he can do for Australia what he does for us.”

Adelaide’s other goal was also a penalty, with Mauk scoring in what may well be his final appearance for the Reds before a likely move to Japan after German midfielder Matti Steinmann had upended Ryan Kitto early in the second half.

This time it's Stefan Mauk who converts the penalty and @AdelaideUnited take the lead 2⃣-1⃣.

Veart said he felt Mauk would still be at the club for next weekend’s clash with Newcastle before completing his move to join Mitch Duke at J2 outfit Fagiano Okayama.

“Stef has been a great leader over the past year and a half and we want our players to go on to bigger and better things,” Veart said.

“Hopefully he’ll have one more game with us next week against Newcastle and then we wish him all the best with his new team in Japan.”

After securing a first win of the season in midweek against Perth, Roar made a perfect start when Mileusnic pounced on a mistake by Jacob Tratt to score his second goal of the season.

The home side take the lead with an early goal from Nikola Mileusnic.

Tratt messed up an attempt to clear a Jay O’Shea flick-on, allowing Mileusnic to open the scoring against his former team in just the second minute.

That however would be the only shot on target for the hosts as coach Warren Moon was left counting the toll of four matches in 11 days after a five-week hiatus.

“Once that second goal went in, it was going to be very difficult for us and we tried. We battled hard but in the end, not to be,” Moon said.

After such a hectic return to action, Moon is now counting the cost with Juan Lescano (hamstring) and Adam Parsons (quad) joining Luke Ivanovic and Cyrus Dehmie in the casualty ward and leaving Mileusnic as the club’s only fit forward.

Moon said he was unsure if the club would look to boost the squad during the January window.

“That’s a discussion with the club and at this stage I’m not sure what our position is as a club in regards to bringing players in.”