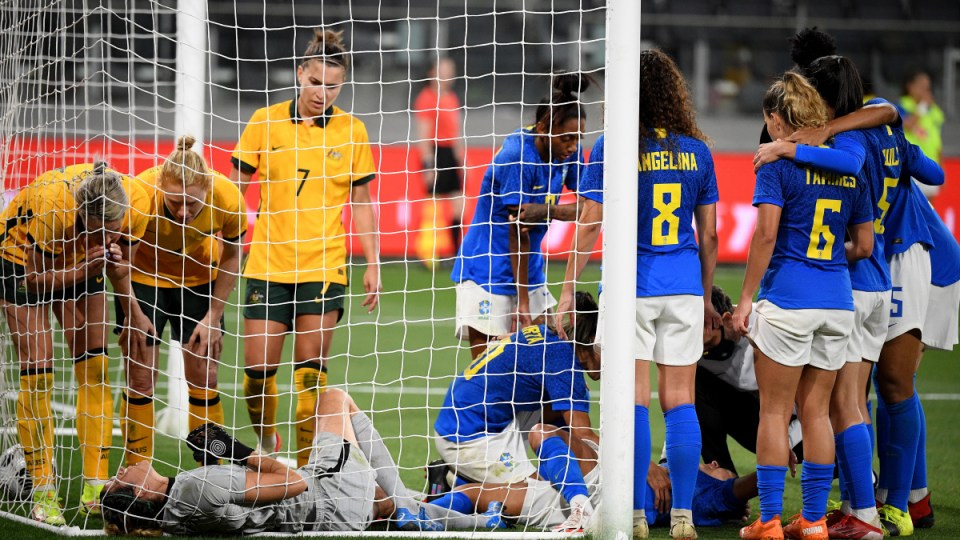 Matildas goalkeeper Lydia Williams has been left to rue a crucial error after Brazil reeled in a two goal deficit to draw 2-2 with Australia in Sydney.

Brazil fought their way back at Parramatta’s Commbank Stadium after goals from Clare Polkinghorne and Sam Kerr had given the home side a lead on Tuesday night.

The first came when Erika headed home unmarked at a corner and the second was a result of confusion in the Australian goal mouth.

Williams was only able to parry it onto the bar as she fell into the goal mouth, leaving Debinha the simplest of finishes to draw Brazil level from close range.

“I was set up for a cross and obviously it came off the boot and it was going into the top corner,” Williams said.

“It turned into a save and I guess that’s how it went.

“We’ll look at the footage and stuff, but as a goalkeeper, you kind of roll with the punches I guess.”

He has stressed the importance of being in a “preparation phase” for the Asian Cup which is likely to continue with a home match-up against the US next month.

But despite being unable to string together wins under the Swede, Williams claimed the fact Australia were able to repel Brazil for the first 60 minutes and score twice was evidence of their growth.

“It’s still a fairly new squad and we are building towards the Asian Cup,” she said.

“I think the first half solidified where we were and they’re a great team and they’ll go out and perform well.

“It’s disappointing (to draw). From where we were it’s a big step leading into January.

“It’s a good test for us and an indication on what we need to improve on out there.”