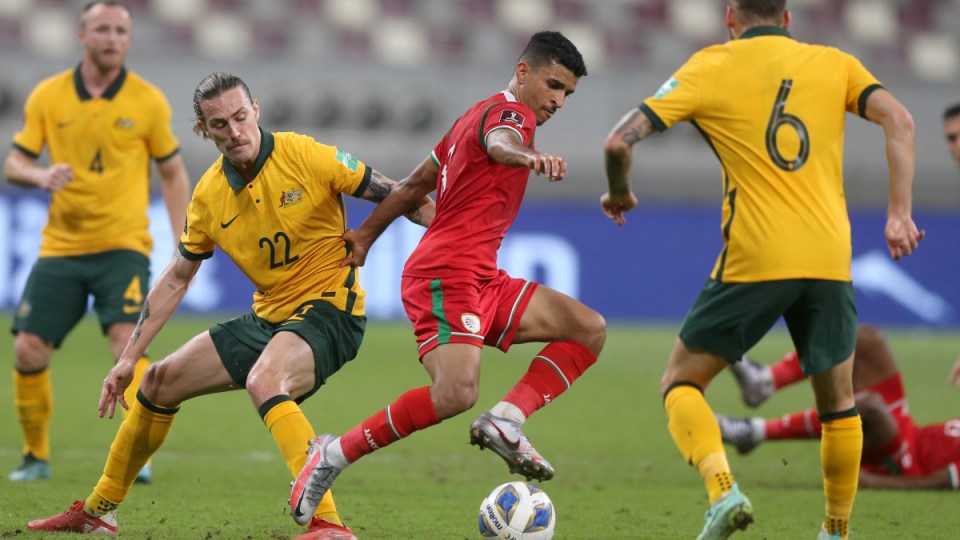 Jackson Irvine of Australia and Zahir al-Aghbari of Oman battle hard for the fall in their World Cup qualifier. Photo: Getty

The Socceroos remain in prime position to qualify for Qatar 2022, prevailing 3-1 over Oman to stretch their winning streak to a world record 11 consecutive World Cup qualifiers in the same campaign.

The hard-fought victory keeps Australia top of group B, ahead of Saudi Arabia on goal difference and a full six points clear of Japan, which they face in Saitama on Tuesday night.

The Socceroos got their foot on the ball early in Doha and made it count when Jackson Irvine’s testing ball into the area was cleared into the path of Mabil, who lashed home

But less than a minute later, Mat Ryan had to make a terrific lunging save to stop an immediate equaliser from Zahir Al Aghbari on the counter.

From there, Oman arguably took control of the first half and the seemingly inevitable equaliser arrived in the 28th minute.

The Socceroos were unable to clear the ball and Oman’s Khalid Al-Hajri showed some good hold-up play before feeding Al Mandhar Al Alawi, who whipped an unbeatable shot into the top corner.

It ended Australia’s run of clean sheets in four games.

Oman lost the influential Al Aghbari to a shoulder injury in the 31st minute and four minutes into the second half, Australia regained the lead.

But when the keeper spilled the effort, an alert Boyle threw himself at the ball to head home from close range.

Boyle was unlucky not to receive a penalty when he was shoved in the back in the 56th.

The game remained tense with the points still in the balance until substitutes Chris Ikonomidis, Fran Karacic and Duke combined with aplomb to seal the victory in the 86th minute.