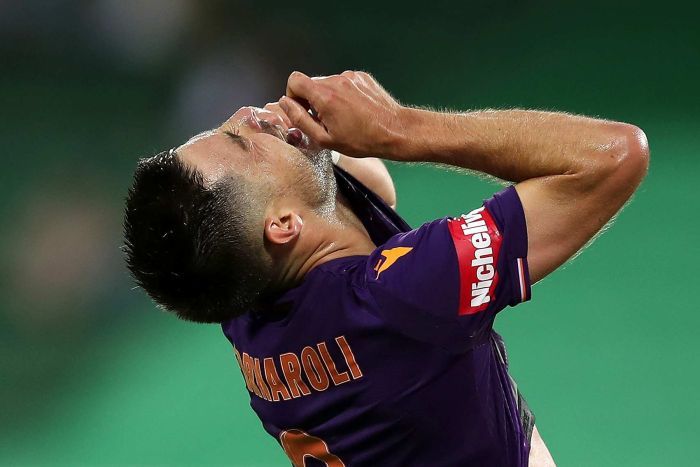 Perth Glory won't be sold to a bitcoin company after owner Tony Sage concluded it wasn't a good fit for the A-League club. Photo: AAP

In the end the numbers didn’t add up.

After much fanfare and hype, Perth Glory owner Tony Sage has pulled the pin on the mooted sale of the A-League club to controversial bitcoin company London Football Exchange.

Sage had planned to sell 80 per cent of the club to LFE advised Football Federation Australia on Monday night the deal was off.

The news will come as a huge relief to Glory fans concerned by LFE and the group’s business model.

LFE is reportedly being sued in London and New York over various business matters.

The company has big dreams to buy eight or nine soccer clubs around the world so it can create an “ecosystem” of assets fans can access with bitcoins.

Founder Jim Aylward conducted one disastrous interview after another in his attempts to promote the group’s first acquisition.

Brief message from @jim_lfe, founder regarding this morning’s announcement.

On each occasion he refused to detail what means LFE would use to buy Glory or any other club for that matter.

But he promised big things, including a deal with an English Premier League club.

LFE’s bid to buy FC Nantes two years ago failed after the French club deemed the company’s “seriousness and credibility” could not be guaranteed.

Further muddying the waters, a 6PR-Nine News investigation on Monday that revealed that Aylward is, in fact, convicted fraudster James Abbass Biniaz.

Perth released a statement earlier this month confirming they had entered into an “asset sale and purchase agreement” with LFE.

The only obstacle at that point seemed to be FFA’s approval.

But as questions began to swell over LFE and its dubious past, Sage seemingly backtracked and insisted no deal had been agreed.

Instead, he flew to London to meet with Aylward to vet the prospective buyers.

Confusing matters further was the fact Sage was appointed LFE chairman in January.

His term was expected to start in March, about the time the sale of Perth would go through.

The mining millionaire has since confirmed he will no longer take on that post.

FFA confirmed on Tuesday Sage had “officially advised … head of leagues Greg O’Rourke that following a due diligence process, the transaction will not be pursued”.

Meanwhile, Glory’s Asian Champions League clash with Ulsan Hyundai on March 4 may not go ahead due to an outbreak of the coronavirus in South Korea.