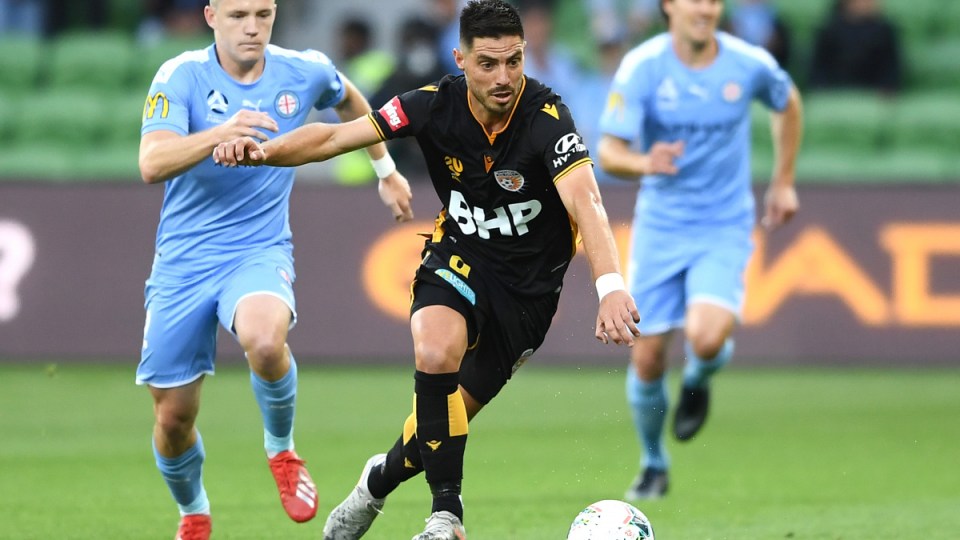 Glory's Bruno Fornaroli on the burst against his old club on Friday night. Photo: Getty

Bruno Fornaroli has been the hero against his former club, as Perth jump off the bottom of the A-League table with a 3-0 win over Melbourne City at AAMI Park.

Fornaroli headed home in the 27th minute, Harrison Delbridge scored an own-goal in the 47th and Tomislav Mrcela rounded out Friday night’s victory with a fine header in the 71st, catapulting the Glory to sixth on the table – albeit with four games this round still to be played.

City started the brighter of the two teams but, despite controlling possession, rarely made inroads in attack and lacked fluency.

Jamie Maclaren had just two decent chances in the opening half – sending one flick over the bar in the fourth minute and a shot into Liam Reddy’s arms in the 15th.

Two minutes later, the Glory almost profited after a disastrous moment from City goalkeeper Dean Bouzanis, when he attempted to play out from the back but turned it over to Diego Castro, who arguably should have done better as he put his shot off target.

Against the run of play, it fell to Fornaroli to open the scoring in the 27th minute.

Juande had a strike ricochet aerially off Connor Metcalfe and Delbridge failed to deal with Fornaroli, who outbodied the defender and powered a header past Bouzanis.

The former City captain had a muted celebration but was mobbed by his teammates.

Perth doubled their lead in the 47th minute through a Harrison Delbridge own-goal.

Neil Kilkenny found Castro, who cut the ball back to Gregory Wuthrich with the defender launching a low, long-range shot.

In attempting to block the ball, Delbridge instead cut it into his own net.

In the 71st minute, Tomislav Mrcela, on his return from injury, made it 3-0.

Kilkenny played a 1-2 with Fornaroli and whipped a ball to the back post, from where Mrcela towered over Delbridge and buried a superb header.

Metcalfe looked to have pulled back a consolation goal in the 79th minute but his left-footed strike was ruled out by the offside flag, with City suffering their first goalless performance since round one’s Melbourne derby.

Fornaroli departed the game in the 87th minute, leaving to applause from City and Glory fans alike.

A-League: Fornaroli steals all the Glory against his old club