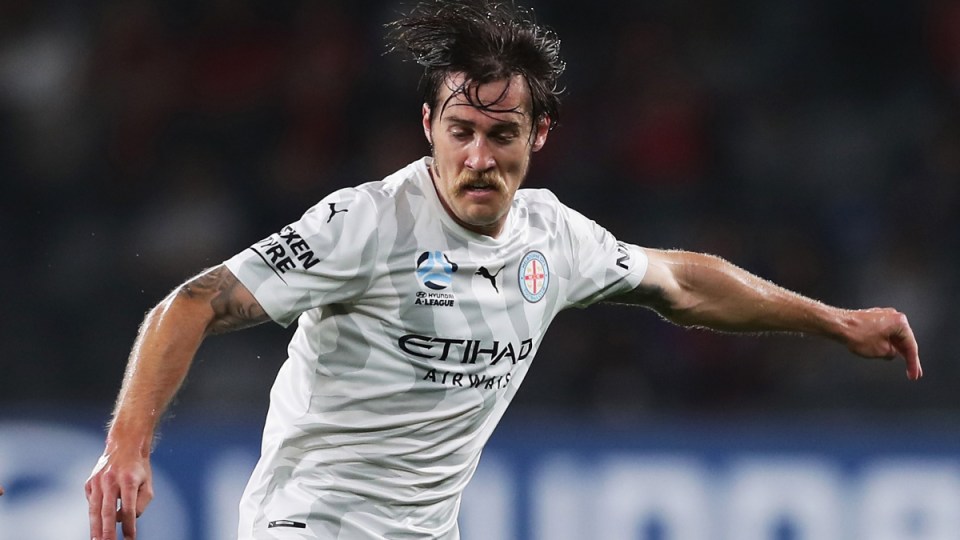 Josh Brillante, in all his tonsorial glory. Photo: Getty

Observers of the A-League over the past month would have been hard pressed to miss the sudden explosion in figures sporting a hairy addition to their top lip.

Movember took the A-League by storm across November and one of the more easily identified moustachioed characters was Melbourne City’s Josh Brilliante, who – taking advantage of his existing beard – sported a look the likes of which would easily qualify him for a part in Hollywood’s next western blockbuster.

“I think it’s important as a footballer [to get involved in charitable efforts],” the City midfielder said as Movember wound down to its final days.

“Obviously, it’s quite a good lifestyle and it’s a lucky position to be in.

“I think it’s nice to be able to give back to the community and enjoy and appreciate these times.”

Brilliante’s point is a salient one for, as the world’s most popular sport by some distance, the power that football wields to serve as a driver for positive social change is undeniable.

The uniting of the footballing community behind the work of Craig Foster and his push to free falsely imprisoned Hakeem al-Araibi in late 2018 and early 2019 shows what can be done when those that love the beautiful game come together.

Less than a year after political machinations denied him a place on the FFA board, Foster worked tirelessly as he crisscrossed the globe to rally support behind the release of the young refugee – a Bahraini refugee wrongfully detained while in Thailand at the request of his former government.

“I just see a kid who plays my game. We are going to have to step up for this kid and as an ex-player, I knew I had that responsibility.”

Demonstrating the latent potential that lies at all levels of the sport, though, the original call for support for al-Araibi came in a social media post from his NPL Victoria club, Pascoe Vale FC.

That one small voice started a global movement and saved a life – and it’s just one example of local football making a difference at all levels of society.

In May, the extraordinary bravery shown by Andy Brennan in becoming the first openly gay male footballer in Australia broke down previous taboos and helped add to the positive conversation around LGBTQIA+ athletes.

Across the 2019 NPLW Victoria season, Melbourne Victory, Calder United and fringe Matildas’ defender Angie Beard ran a fundraiser in which she donated funds to Beyond Blue every time she found the back of the net – which she did 31 times.

And, despite being cruelled with a long-term injury before the season, the impact of Newcastle Jets attacker Kaine Sheppard is still felt through the work of the KS Foundation.

Inspired by Kaine’s experiences with his brother Jake, the foundation seeks to create opportunities for children with autism to play and enjoy football.

“I was born and raised in England and [Jake] had autism,” Sheppard told The New Daily.

“He used to come to all of my games – he was my No.1 fan and supporter. Being able to give back to families, it was something that I was really excited about and interested in, so we started the KS Foundation.

“We’ve got sensory rooms – one of the boxes in the [Jets’] stadium – and we put kit in there; headphones for the children, tents and games. A lot of sensory stuff can set children off, such as loud noises, lights, storms or if there are any emotions, such as getting upset or getting angry.

“It’s an opportunity to go back into the room and have an area where they can relax a bit instead of having to leave the game.

“They have space when they can relax and once they calm down, quite a lot want to go back out there to watch.

Another fantastic day in the KS Foundation Autism Sensory Room.
8 families had the opportunity to spend the day in a comfortable environment at McDonald Jones Stadium to watch the Newcastle Jets take in Perth Glory.#Autism #AutismAwareness #AutismAustralia #Aleague #PerthGlory pic.twitter.com/gihM8ZOzAK

“The biggest one is families being able to go all together. Normally, the husband is a member and goes on his own but more recently they’ve been able to go and enjoy the game together.

“For me growing up, seeing the impact that some of the players I looked up to had on me, to be able to give back and seeing how much the kids liked seeing their heroes was really good.”

There’s a lot of things that Australian football doesn’t get right.

But it can’t be forgotten that every level of the game is inhabited by good people doing what they can to give back.

Donations to the KS Foundation can be made here.

Hair-raising: Footballers giving back to the community